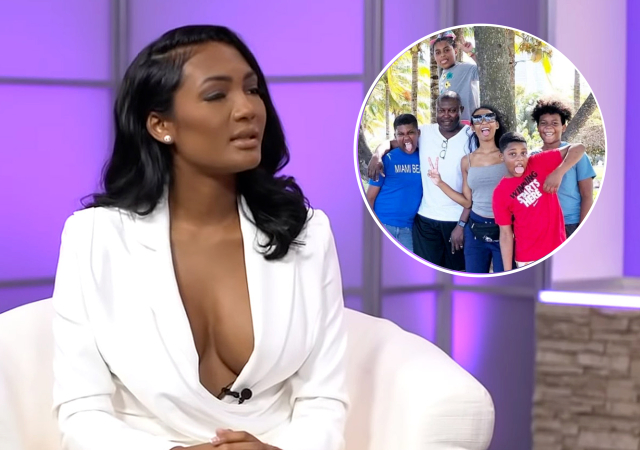 Simon Guobadia’s ex, Falynn, says the hardest part of their split is her not seeing his kids. Falynn recently shared her story with Up and Adam.

“I know I’ll be strong,” the celebrity said. “I’ll get through it, I always do. It’s just the kids.”

Falynn and Simon Guobadia share eight kids together. She has three kids from her previous marriage, while Simon has five kids from previous relations. Together, Falynn and Simon built a blended home that was, to many, the epitome of harmony. Such consonance, however, fell apart publicly a few weeks ago when Porsha Williams of the Real Housewives of Atlanta (RHOA) took to Instagram to declare her love for Simon. The Reality TV star and her boyfriend further solidified their love for one another with engagement rings.

“Our boys,” Falynn told Up and Adam. “They know exactly who this woman is and I’m not there to console them,” the celebrity mom said. “I’m not there because I can’t see them. And I can’t hold them.”

Falynn went on to say, “I’m going to miss our boys. They’re all so different from one another,” the celebrity shared. “It’s hard but I’m going to miss it. And tucking them in at night. Our trips and Christmas …”

Some have wondered why Simon and Falynn did not try couple’s therapy to rectify their current issues. Falynn, however, revealed that she and her estranged husband have sought counsel to fix problems in their marriage on several different occasions.

“Simon and I are not new to couple’s therapy,” Falynn revealed during her interview with Up and Adam. “During one of our therapy sessions, I will never forget it – I’ve never forgotten it, actually – the therapist asked him, ‘Have you ever cheated on Falynn? Would you ever cheat on Falynn?'” the celebrity mom recalled.

Simon allegedly responded to the question by saying, “‘Simon doesn’t get caught unless Simon wants to get caught.’ Those words have stuck with me,” Falynn told Up and Adam.