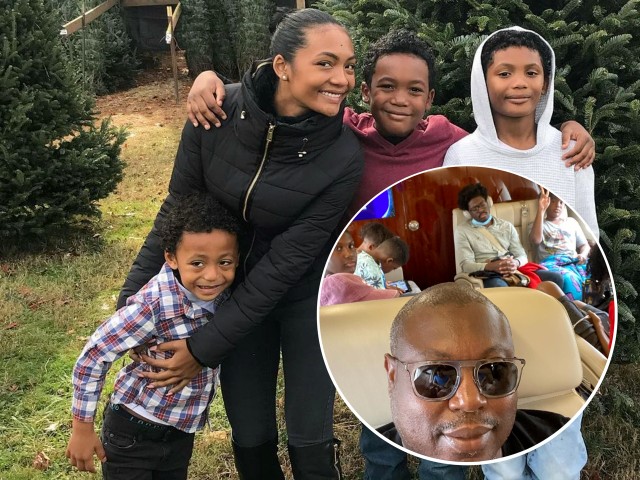 Simon Guobadia and his ex-wife, Falynn, have eight kids between them. More details about the former couple’s lives continue to be revealed in light of Simon’s alleged engagement to Porsha Williams.

Simon and Falynn tied the marital knot in 2019. Simon, who is the founder and CEO of SIMCOL Group, came into the marriage with five children from his first marriage. Falynn entered the union with three kids.

Troy, Falynn’s oldest son, was born when she was just 17-years-old. The celebrity mom recently celebrated his birthday with a sweet Instagram post.

“I can’t believe I gave birth to my firstborn son 14 years ago,” Falynn shared online. “Happy birthday to the best big brother and son a mother could ever ask for. You’ve taught me how to be a mother, father, and friend to you and your brothers. I wouldn’t have made it this far in life without you, son. Happy birthday, Troy. Mommy loves you.”

“Nicole graduates with a Bachelor of Science Degree in Computer Science and a Minor in Mathematics from the University of Washington (one of the world’s most prestigious universities) – School of Engineering and Technology (ranked #24 nationally),” Simon told his social media fans. “She already nailed down full-time employment in her field of choice, ahead of today’s commencement,” the proud father added. “You have made the family very proud,” Simon wrote to his daughter.

Mr. Guobadia’s youngest child, Ximena, has not been around her father much these past few months because of the coronavirus pandemic. Simon recently took to Instagram to celebrate quality time spent with his older son and younger daughter in Florida. “She traveled with her older brother Quentin to Miami to spend some time with me,” the celebrity father shared. “I am so blessed to have 5 gifted children,” Simon declared.

Porsha Williams cleared the air regarding rumors about her relationship with Simon Guobadia this past Monday (May 10). The Real Housewives of Atlanta (RHOA) star confirmed her love for her new beau. Porsha did not, however, officially confirm her engagement to Simon. Still, fans speculate the RHOA star is preparing to marry her new boyfriend because of a picture that appeared to feature an engagement ring on Porsha’s left hand.

Porsha has one child, Pilar “PJ” McKinley, with entrepreneur Dennis McKinley. Get caught up with the celebrity mom by watching this past season of the Real Housewives of Atlanta.