"It's Truly A Beautiful Moment In My Life" 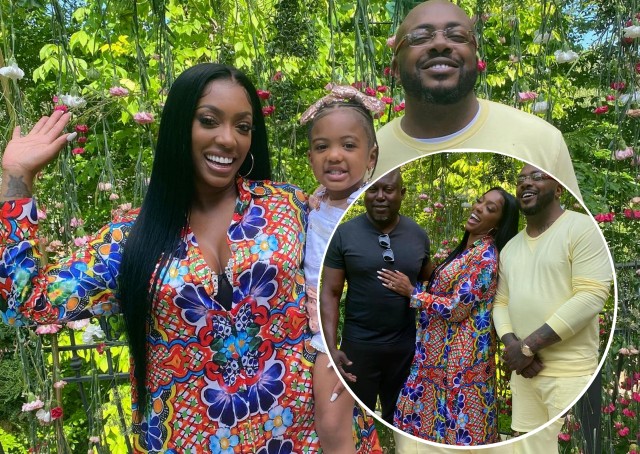 Is Porsha Williams engaged to Falynn Guobadia’s ex-husband, Simon Guobadia? Is the Real Housewives of Atlanta (RHOA) star pregnant by him as well? How is Pilar Jhena’s father, Dennis McKinley, handling all of this? Porsha took to Instagram on Monday (May 10) to set the record straight.

“Our relationship began a month ago—yes we are crazy in love,” Porsha told her social media fans of her relationship with Simon Guobadia. “I know it’s fast but we are living life each day to its fullest,” the RHOA star added. “I choose happiness every morning and every night,” Porsha told her fans. “Tuning out all negative energy and only focused on positive wishes. He makes me so happy and to me, that is what matters most.”

Porsha sparked rumors of engagement and expectancy after posing alongside Falynn’s ex-husband for a Mother’s Day post. Some even suspected Porsha to be pregnant by Simon given her loose apparel. Regardless of whether or not Porsha and Simon are expecting, there is still talk of the RHOA star being a homewrecker and bad friend. Porsha, however, disputes such accusations.

“For all of you that need facts, I get the optics but Simon filed for divorce from a previous marriage in January,” Williams told her social media fans on Monday. “I had nothing to do with their divorce filing. That’s between the two of them,” Porsha shared.

All is well in terms of Simon and Dennis as well. “Simon and Dennis are committed to being respectful and supportive of my happiness in this situation, as well as being the best co-parents they can be to baby PJ,” Porsha assured her fans. “Two black men stepping up and being amazing people – let’s praise them! It’s truly a beautiful moment in my life and we cannot wait to spend the rest of our lives together.”

TONI BRAXTON HANGS OUT WITH HER BOYS FOR MOTHER'S DAY

DMX'S DAUGHTER TO BE FEATURED ON RAPPER'S POSTHUMOUS ALBUM

DMX'S DAUGHTER TO BE FEATURED ON RAPPER'S POSTHUMOUS ALBUM