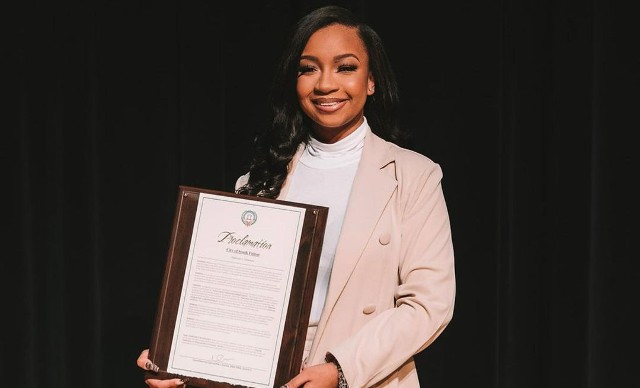 Makenzie Thompson put in the hard work, knowing that it would eventually pay off, and it did. The Georgia teen has gotten accepted into nearly 50 colleges and has been offered more than $1 million in scholarships, according to WSB-TV Atlanta. In actuality, her scholarship offers now stand at $1.3 million.

The Westlake High School senior is an honors student who is not just hitting the books. Makenzie is a well-rounded scholar involved in a number of extracurricular activities such as serving as Senior Class President, co-captain of the dance team, and a community volunteer at her local veterinarian clinic.

“We have Delaware State with $64,000, Xavier with $100,000… Tuskegee with full tuition and books. We also have Wingate with $128,000…So up here I have 48. I have 49 acceptances but we ran out of room,” Makenzie proudly exclaimed to reporters in her interview, while pointing to the wall at Westlake High School under her senior picture.

Although an extreme honor, the teen is quite taken aback  by the financial magnitude of it all.

“Once I hit a million I was like that’s kind of crazy. Like people don’t make a million in their lifetime,” she said with excitement to the reporters.

The teen continued, “I am extremely proud of myself. It’s been a long time coming. A lot of long nights.”

And of course, both of her parents could not be happier for their daughter.

“She knew what she wanted. And she knew what it was going to take to get there, her father, Stephen Thompson said in the interview.

Her mother Jennifer Thompson added, “We were ecstatic. I said oh my god. 1.3 million and they’re giving you this just based on paper.”

In addition the named schools above, Makenzie was also accepted to UGA, Purdue, Clemson, Ohio state and many others.

However, the final vote has been cast and Makenzie has decided to call Tuskegee University home as she embarks upon the next phase in her educational career. So, just what does she plan to study? Well, if you hadn’t guessed by her volunteer work, Makenzie wants to become a veterinarian. She will study animal science at Tuskegee.

Congratulations, Makenzie. We know that the future is going to be filled with amazement for you!

PREGNANT RIHANNA SAYS SHE WILL BE 'PSYCHO' ABOUT PROTECTING HER 'KIDS'

PREGNANT RIHANNA SAYS SHE WILL BE 'PSYCHO' ABOUT PROTECTING HER 'KIDS'