PREGNANT RIHANNA SAYS SHE WILL BE ‘PSYCHO’ ABOUT PROTECTING HER ‘KIDS’ 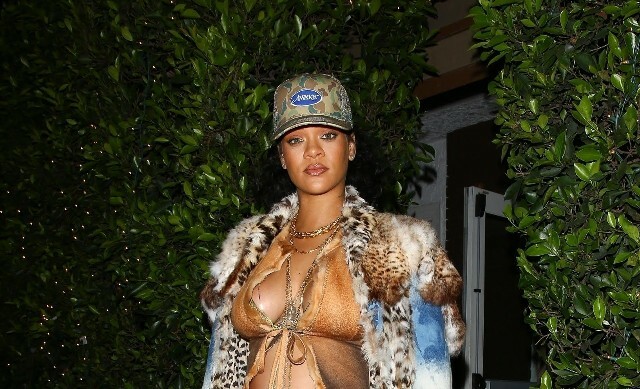 Rihanna is expecting her first bundle of joy with her boyfriend, rapper, A$AP Rocky. The mother-to-be is in her third trimester and in an interview with Elle Magazine, she opened up about her future life as a mom, saying that she will be a psycho about protecting her baby.

“Teresa from Jersey does not play about her kids,” the Grammy winner said in the interview, referring to Teresa Giudice from Real Housewives of New Jersey. “She will flatten you about those kids. And that resonates with me a lot because I feel like that’s the type of mom I’m going to be. Psycho about it.”

The 34-year-old then quipped, saying that she’ll be “worse” than Giudice, adding, “You talk about my kids, it’s over.”

A source told People Magazine that the star is “excited to be a mom” and “couldn’t be happier.”

The source added in their interview that, “Everything Rihanna does, she does it her own way on her own time table, and having a baby is no different. [Rihanna and A$AP Rocky are] just like any other pair of parents-to-be. Yes, they happen to be famous but they’re just the cutest, giddiest young couple that’s expecting kids.”

Rihanna revealed to the world in January of this year that she was expecting her first child with the 33-year-old rapper.

Known for glam at all times, she still holds the title even as an expectant mother. The “Love on the Brain” singer admitted to Elle that continuing to get all glammed up helps her feel like a “real person”.

“There’s also those days… especially in the third trimester where you wake up and you’re like, ‘Oh, do I have to get dressed?’ Makeup for sure helps you feel like a real person.”

Rihanna told People that, “Right now, being pregnant, some days you just feel like, ‘Ugh, I just want to lay here on this couch all day.’ But when you put on a little face and a little lipstick, you transform. You put some clothes on, and it’s like, when you look good, you feel good.”

She continued, “I’ve heard that for a very long time, but it’s true. It really can get you up off that couch and make you feel like a bad b#t^h.”

Bar none, Rihanna’s looks during pregnancy have taken maternity style to an entirely different level. Needless to say, she has rocked every last look that she and baby have had on.

To read the Elle interview in its entirety, click here.