"Already Blazing A Path In Denver" 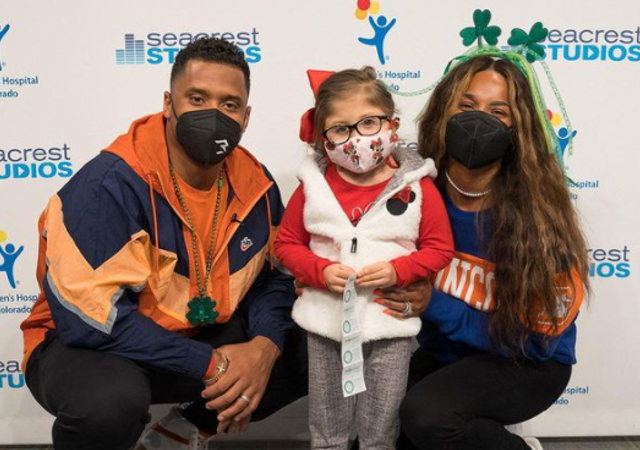 Ciara and Russell Wilson have touched down in Denver! The celebrity couple stopped by Children’s Hospital in Colorado on Tuesday (Mar. 15) to spread love and joy to the medical facility’s patients.

“Truly a special day @DangeRussWilson and I will never forget,” Ciara said of the experience. “Our 1st Tuesday Tradition Hospital visit with the children and families of @childrenscolo in Denver,” the ‘Beauty Marks’ singer said. “Our hearts were filled with love and inspiration. Truly grateful!”

Russell Wilson also commented on his and Ciara’s visit to Children’s Hospital in Colorado, which included a storytime segment featuring their book, Why Not You?. “Day 1 in Denver,” Russell exclaimed on Instagram. “Inspired by the courage these amazing kids have,” the football player shared. “@Ciara and I had a blast today! @ChildrensColo 🧡💙 Broncos Country … #LetsRide.”

Many praised Ciara and Russell Wilson for immediately getting into charity work in Denver after years of good deeds in Seattle. “Already blazing a path in Denver,” one fan said after watching a video clip of Russell and Ciara visiting the kids at Children’s Hospital. “You’re amazing and Seattle will forever be grateful to you.”

Russell and Ciara confirmed the rumors of his trade from the Seattle Seahawks to the Denver Broncos over the weekend. Ciara shared a picture of herself striking a pose beside an orange Bronco to celebrate her husband’s move to his new team. Meanwhile, Russell uploaded a video collage that highlighted his time with the Seahawks.

“Thank you for being a huge part of my childhood,” one fan wrote in the comments section of Russell’s Instagram post. “Seattle wishes you and your family nothing but the best,” the supporter exclaimed. Another of Russell’s social media followers wrote, “We will miss you in Seattle. It was an honor growing up watching you play for the Hawks!”

Ciara and Russell Wilson parent three kids – Future Zahir, Sienna, and Win – together. Russell’s new contract with the Broncos places him in line to be the ninth-highest paid quarterback in the NFL.