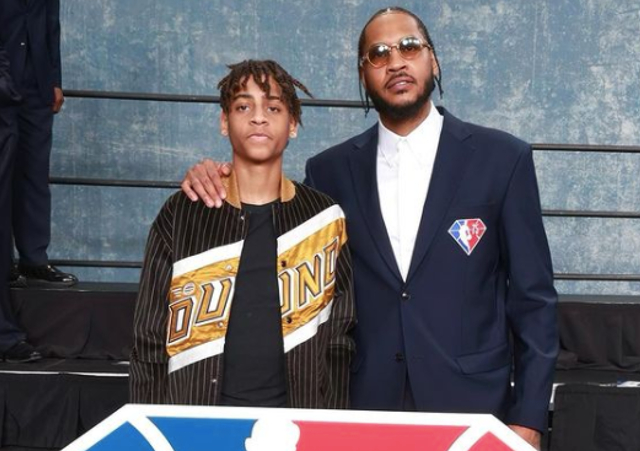 Carmelo Anthony was among the greats honored during All-Star weekend in Cleveland, Ohio. La La Anthony made sure their son, Kiyan Anthony, was part of the historic experience.

The television personality took to Instagram on Tuesday (Feb. 22) to celebrate her son’s father and to also shed light on Kiyan spending time with NBA royalty during the event.

“Super happy @kiyananthony got to witness such an iconic moment in history honoring his dad @carmeloanthony and the NBA 75,” La La said in reference to the NBA’s All-Star weekend, which commemorated 75 years. “One day he will look back and really realize the greatness he was surrounded by this day,” Anthony said of her and Carmelo’s son.

Kiyan was certainly surrounded by greatness as his father joined LeBron James of the Los Angeles Lakers, retired Miami Heat player Dwyane Wade, and Chris Paul of the Phoenix Suns at All-Star weekend. Ray Allen was also present along with Michael Jordan.

Many commented on Kiyan Anthony’s height, which nearly matches his father. “Kiyan is getting tall,” one fan observed after seeing a picture from All-Star weekend shared on Carmelo Anthony’s Instagram page. One social media fan even said Kiyan was “taller than Chris Paul.”

La La Anthony and Carmelo Anthony decided to seek marriage dissolution several months back. The former couple still works in harmony, however, to rear their son.

“I can’t say how many times what an amazing partner I have in that sense,”La La said of Carmelo’s excellent parenting skills during a recent interview with SELF. “Boys and girls need their dads, but boys need their dads. It’s important,” the celebrity mom added.

“Sometimes we get caught up in emotions and feelings and make it about us,” La La said when giving advice for successful co-parenting. “Just always remember, it’s about your child who didn’t ask to be here, didn’t ask to be in this situation,” the celebrity admonished other moms and dads.

JENNIFER HUDSON AND SON HAVE AN 'ALL-STAR' WEEKEND