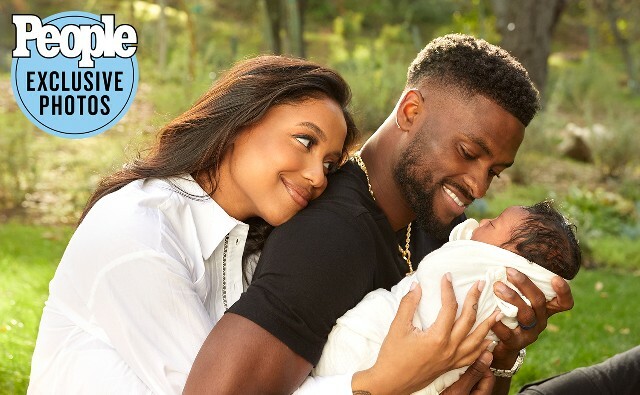 Van Jefferson has decided on a name for his son. The Super Bowl champion recently revealed the moniker of “Champ” for his little one.

“It wasn’t always picked,” Van said of the process of selecting a name for his and wife Samaria Jefferson’s newborn son. “We were really thinking about ‘Wynn’ and ‘Miles’ but then it was like, ‘I think it’s very fitting to name him Champ,'” Van added.

“And we just looked it up and Champ is like a warrior. And my wife is a warrior. What she did that whole game and what she did throughout the whole week of the Super Bowl, the week of Super Bowl being so crazy, he’s a champ and she’s a warrior, so Champ Curtis Jefferson. That’s the name we got.”

Samaria Jefferson was expected to give birth at any moment during Super Bowl week. Still, the football wife was committed to attend the big game on February 13, 2022, in support of her husband whose team won the Super Bowl championship.

“I did not want to miss the game for anything,” Samaria told PEOPLE exclusively during a recent interview. “I watched him play since high school, college and now the NFL, so I was dedicated to go,” Mrs. Jefferson shared.

Samaria made it to the stadium and was heading into the venue when her water broke. Still, the NFL wife pressed on in an attempt to see the game.

“We were walking up to the stadium and I was having to stop every five minutes from the pain,” Samaria shared with PEOPLE. The expectant star kept taking breaks in between until, through tears, she could no longer hold out. Van got the word that his wife was in labor after the Rams won the Super Bowl championship.

“I was on the field and this lady was like, ‘Your wife is going into labor,'” Jefferson recalled during his interview with PEOPLE. “I was like, ‘Are we serious right now?'”

Cameras caught the moment Van Jefferson learned of his wife’s labor and delivery. “We hauled tail. I’m in the car going, ‘We need to go a little bit faster. We need to get there!'”

Champ Curtis Jefferson was born on Super Bowl Sunday. He joins his older brother and sister at home.