"Heirs To The Thrones" 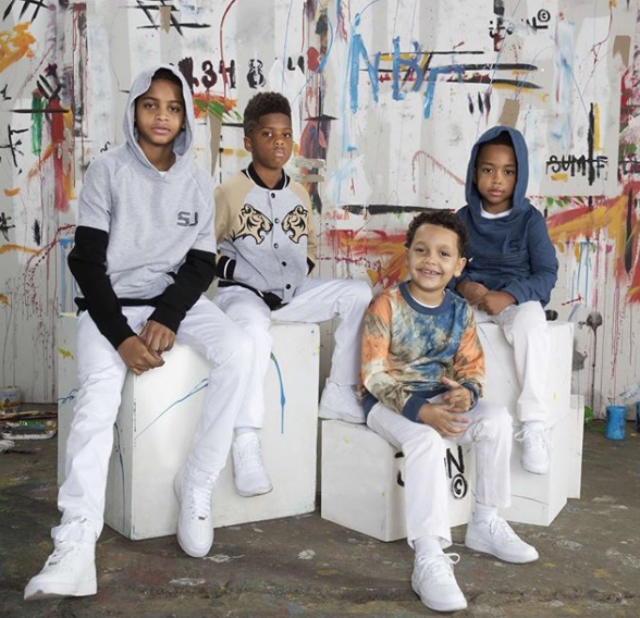 Yes! The Sean John Spring/Summer 2018 collection is here, and who better to model the new styles than the sons of some of Hollywood’s most notable men? Kiyan Anthony, Chris Paul II, and the Thomas brothers, James and Jaiden, joined to deliver a smash-hit campaign.

One candid showed the boys posing together while modeling the latest wear by the brand. Kiyan wore a gray Sean John hoodie that matched the style of one of the Thomas brothers. All four of the models wore white pants that put the finishing touches on the imagery presented. Another candid showed the young models rocking another hoodie design that bore the signature Sean John appeal.

The pictures weren’t the only thing that came out as pure fire. Sean John also got a bit of footage in with Chris, Kiyan, James, and Jaiden. “One day they will walk in your shoes,” the caption underneath a snippet of the footage shared on Instagram read. “Make sure they are pointed in the right direction.”

The young models are certainly grounded and headed in the right direction. Chris Paul, II, often does charity work with his dad. The Thomas brothers have an excellent role model for their father, Isaiah Thomas. Kiyan Anthony is becoming quite the veteran in the fashion industry, which is why his mom, La La Anthony, doted on her son’s most recent gig.

You can learn more about Sean John at the brand’s website. Stay tuned for more young star modeling news!

MAHERSHALA ALI ON HIS DAUGHTER: 'SHE WEARS ME OUT AND PUTS ME IN MY PLACE IN HER OWN WAY'