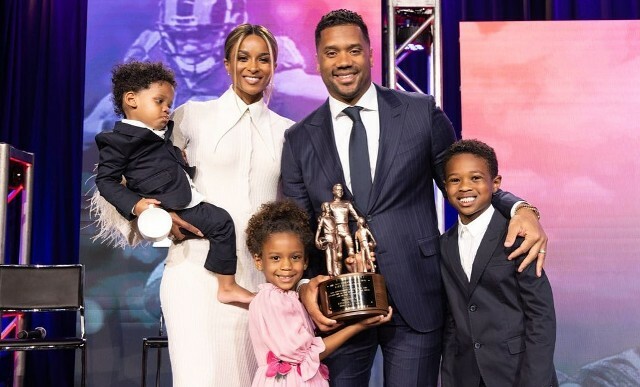 Russell Wilson has loads of support at the Super Bowl Breakfast on Sunday (Feb. 13). The Seattle Seahawks player received the 2022 Bart Starr Award with his wife, Ciara, and kids cheering for him in the audience.

“Gratefulness,” Russell shared after receiving the award. “Family Forever,” the NFL player said. “Congrats bro,” La La Anthony wrote in response to Russell’s Instagram post that shed light on his award. “I love you, baby,” Ciara wrote online. “We are so proud of you,” the ‘Level Up’ artist said.

The Barr Star Award is given to the NFL player who exemplifies leadership on the field and at home. The award is also meant to shed light on star athletes who spearhead positive efforts in their communities.

Russell Wilson has worked alongside his wife to build the Why Not You Foundation. The charity began as an effort to empower underprivileged youth. The nonprofit has evolved into a school that further works to fight poverty through education. The Wilsons also recently launched the Immuno Heroes campaign, which raised upwards of $10 million for Seattle Children’s Therapeutics.

“Every time we go to Seattle Children’s Hospital, we pray for a miracle,” Russell recently told the press. “It’s been a joy to build something special that’s meaningful for other people,” The Seattle Seahawks player said of his charity.

Several rumors have circulated about the possibility of Russell Wilson leaving the Seahawks for another team. The football star, however, has not officially signed with another team and continues to express a desire to focus on the game while playing for Seattle.

“I’m focused on what I’m doing and that’s preparing to win for the Seattle Seahawks,” Russell said during a recent interview with the Associated Press’ Pro Football Podcast.