"This Isn't What I Wanted To Wake Up To" 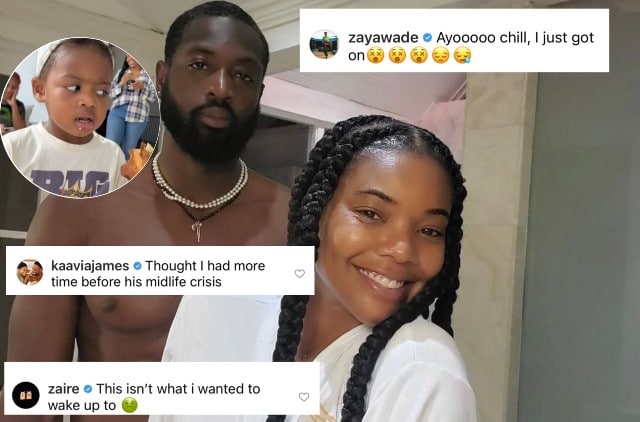 Dwyane Wade’s kids are not thrilled about his birthday candid with his wife, Gabrielle Union. Zaya and Zaire responded to their father’s Instagram post celebrating his thirty-ninth birthday with disgust.

Dwyane took to Instagram on Sunday (Jan. 17) to commemorate his special day. The retired NBA player uploaded a picture that featured him nude. Thankfully, Gabrielle Union stood in front of Dwyane Wade so fans only saw his chest along with the side of one of his thighs. “Birthday behavior,” Dwyane captioned underneath the candid. “Thirty-nine is already looking up,” Wade told his social media fans.

Dozens loved the racy photo of Dwyane and Gabrielle. “Y’all wild,” wrote one fan in response to the candid. Zaya and Zaire also responded to the photo of their dad and stepmom in a hilarious manner.

“This isn’t what I wanted to wake up to,” wrote Zaire in response to Dwyane Wade and Gabrielle Union’s racy photo. Zaya wrote, “Ayooooo, chill. I just got on.” Even Dwyane and Gabrielle’s toddler daughter, Kaavia James, responded to the candid of her father. “Thought I had time before his midlife crisis,” a post shared from Kaavia’s Instagram account read.

Dwyane Wade has been in full celebration mode all weekend long because of his birthday. The star athlete’s kids wished him well on his birthday this past Sunday. “Love you deeper than the surface,” Zaire wrote to his father this past weekend. The young star also shared a throwback candid that featured him with his dad when Dwyane played for the NBA.

Dwyane Wade often credits his oldest son as the driving force that led to his maturity. The former NBA player delved into his life as a father during a 2019 interview with Miami Herald.

“My favorite role and my favorite job in life is to be a parent, to be a father,” Dwyane shared during the interview segment. “I think I was born to be a leader and the best place that I can be a leader is in my household,” Wade said. “So I’m happy that I’m able to be there to each of my kids and maybe one get more coverage than the other, but I treat them all the same. I love them, I support them all.”