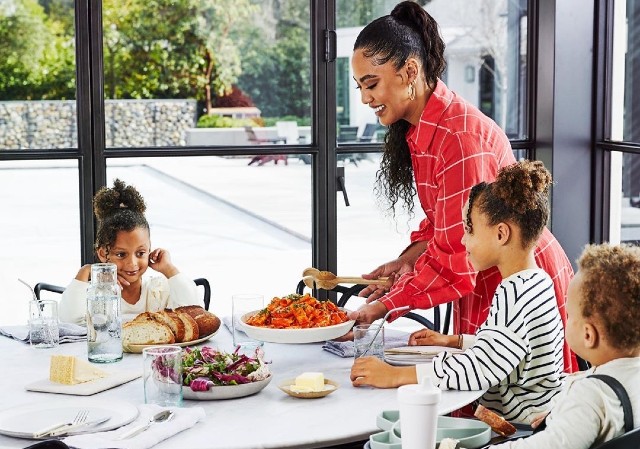 Chef Ayesha Curry, the wife of Golden State Warriors superstar Steph Curry, is releasing a new cookbook called The Full Plate. Ayesha is not just promoting her new book by herself, she has her three adorable kids: 8-year-old Riley, 5-year-old Ryan, and 2-year-old Canon Curry, to help her.

On Instagram, Ayesha Curry recently posted a couple of sweet photos of herself serving her children a recipe from her new cookbook, roasted red pepper pasta, and Ryan especially looks eager to dine. The caption reads: “Get you someone that looks at you the way Ryan is looking at my roasted red pepper pasta 😂THE FULL PLATE drops in less than two weeks! Preorder now with the link in my bio. I’m so excited, my second cookbook baby!!!!!!!!!! No recipe takes longer than an hour! (Ain’t nobody got time for that 🤪).” The Full Plate is Ayesha Curry’s second cookbook; her first was The Seasoned Life: Food, Family, Faith, and the Joy of Eating Well in 2016. In April 2020, Ayesha also released her lifestyle magazine Sweet July, which was named after her favorite month. As a mother of three, Ayesha hopes that The Full Plate will bring families joy with its 100 efficient, delicious recipes.

“The Full Plate is really so much more than a book to me, it’s more of a representation of my journey with food and where I’m at in life,” says Ayesha. “It’s been over 4 years since I wrote The Seasoned Life, back before I started my career and when it was just Stephen, Riley and I.”

“Now, as a working mom of three babies, I’ve had to force myself to approach cooking differently and make the same flavorful meals in a fraction of the time,” continued Ayesha. “The Full Plate is truly a product of that journey; a collection of recipes and tips I’ve learned along the way.”
The Full Plate is available for preorder and comes out on September 22.

MADISON BROWN IS TAKING THE DANCE WORLD BY STORM

BOW WOW CALLS HIS DAUGHTER HIS 'EVERYTHING' AMID BABY RUMORS

BOW WOW CALLS HIS DAUGHTER HIS 'EVERYTHING' AMID BABY RUMORS