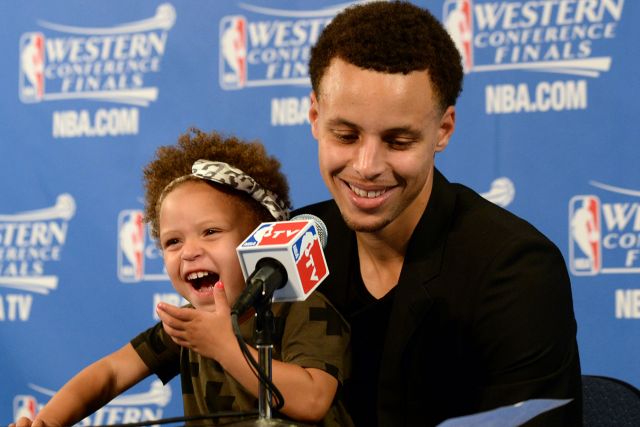 Golden State Warriors superstar Steph Curry and Ayesha Curry’s eldest child, 8-year-old Riley Curry, recently went viral for dancing to Beyonce’s visual album BLACK IS KING. Riley is indeed an Internet darling and has earned many fans due to her sassiness and cuteness, so here is a list of Riley’s six greatest moments in the spotlight.

1. When she hushed her dad up

Named after the Warriors’ former general manager Larry Riley, Riley Curry first burst onto the scene in 2015, when she famously interrupted her father’s press conference, which ended up launching Riley into social media stardom. Steph brought Riley along for his postgame press conference of Game 1 of the 2015 Western Conference Finals, where the Warriors defeated the Houston Rockets 110-106, and hilarity ensued. When her dad started speaking, Riley hilariously told him: “That’s too loud daddy, be quiet,” which made Steph and the reporters laugh. From waving at the reporters to delivering exaggerated fake yawns, Riley showed that she is a natural in front of the cameras. “She is just like this,” laughed Steph.

Riley Curry returned for another postgame press conference after the Warriors defeated the Rockets in Game 5 of the 2015 Western Conference Finals 104-90, where she again stole the show. She adorably dropped a line from the song “Blessings” by Big Sean featuring Drake and Kanye West: “Way up, I feel blessed.” “You wanted to say that,” laughed Steph along with the reporters. Riley was much more interested in hiding in the curtains and hopping around than listening to her dad’s postgame talk. “She’s taking advantage of the situation for sure,” said Steph. “She’s way too comfortable.”

On her third birthday, Ayesha Curry posted an adorable Instagram video of Riley dancing to the hit song “Watch Me (Whip/Nae Nae)” by Silento. Even at 3-years-old, Riley was impressing people with her moves and her version of the “Nae Nae” is definitely the cutest one out there.

On December 28, 2019, during a Warriors game against the Dallas Mavericks, Steph and Riley Curry were seen executing an elaborate secret handshake, which ended in an adorable face clasp and a kiss, which went viral on Twitter. Fans loved it, calling the handshake “father-daughter goals.”

Riley Curry isn’t just good at dancing, she’s also got bars. On an Instagram live alongside her parents and younger sister, 5-year-old Ryan Curry, Riley rapped the lyrics to the 2018 song “Coming In Hot” by Lecrae and Andy Mineo.  Lacrae even joined them on Instagram Live so he could see young Riley perform his song, which she did without missing a beat. “I don’t even have to rap anymore. Riley, you got my job, you got it,” joked Lacrae.

6. Dancing to BLACK IS KING

On August 8, Ayesha Curry posted an Instagram video of Riley dancing to the song “ALREADY” by Beyonce, Shatta Wale, and Major Lazer from Beyonce’s visual album BLACK IS KING. In the clip, Ryan sits on the bed of a pickup truck and sings along while Riley busts out some fierce, professional-looking dance moves. Ayesha captioned the post: “A little Saturday inspiration. 🖤 My baby girls. They are LOVING ‘Black Is King.'” If Riley doesn’t become a famous basketball player like her father or a chef like her mother, she’ll definitely have a bright future as a dancer.

BEYONCE AND KIDS HANG OUT WITH FAMILY IN THE HAMPTONS