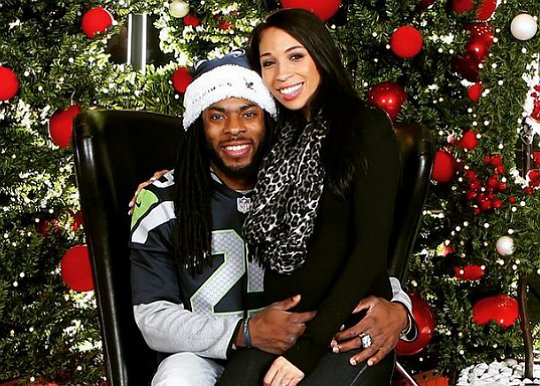 Even after losing the Super Bowl, Richard Sherman has something to celebrate. The Seattle ‘Seahawks’ player recently welcomed his and girlfriend Ashley Moss’ child into the world.

“My son sure does know how to make an entrance! 2/5/15… Is it a coincidence or is he just that clever?! Either way I’m ecstatic,” wrote Sherman shortly after his girlfriend gave birth on Thursday. The NFL star also tweeted, “Haven’t felt anything better than this! Thank you God such a blessing!”

It was speculated that the NFL star’s son would make his grand entrance on Sunday, which would have made him a Super Bowl baby. “Well, I guess we’ll have a Super Bowl baby,” Ashley said during an interview just before the NFL championship. “If you see Richard heading for the locker room right after it hits zero in the fourth quarter, don’t be surprised.” Moss added, “I told him, ‘Play the game, and it’ll be a good story to tell.'”

Richard certainly did play the game on Sunday. The ‘Seahawks’ player, along with his teammates, competed in one of the most surprising Super Bowl games that the nation has seen in a while. Although he and his team lost, Sherman expressed happiness in having the opportunity to contend for the championship for the second year in a row. “Thank you God for giving us the opportunity…. That’s all you can ask for….Thank you everyone for the support all year,” tweeted the star shortly after the game concluded.

Richard and Ashley are the proud parents of one child.