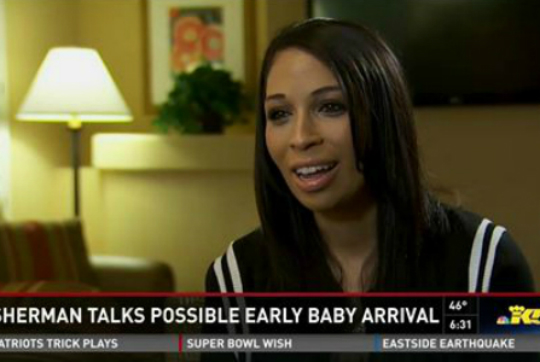 Richard Sherman announced the expectancy of his and girlfriend Ashley Moss’ first child a few days ago, and many became ecstatic over the possibility of the Seattle ‘Seahawks’ player welcoming a son on Super Bowl Sunday. Now, the star athlete’s girlfriend is sharing the details about her pregnancy.

“We didn’t realize it was going to be such a national story,” says Ashley . The expectant mom is nine months pregnant and tells KING5 that she and her boyfriend have already chosen a name for their son. “We’ve picked a name but we’ve decided not to release it yet, just to keep it to ourselves until he comes. We’re hoping that he matches the name that we’ve chosen for him. He’ll have the same initials [as his father]. So ‘R.K.S.'”

Miss Moss also comments on the possibility of her going into labor during the big game. “Well, I guess we’ll have a Super Bowl baby. And if you see Richard heading for the locker room right after it hits zero in the fourth quarter, don’t be surprised. Besides that, I’m not going to let him know.” She adds,  “I told him, ‘Play the game, and it’ll be a good story to tell.'”

So what about the personality of her little one? “I’m pretty sure that he’s going to get some of those traits that Richard has but we kind of balance each other out, so I’m hoping that [our baby] will be that outgoing person but be quiet at the same time.”

The Seattle ‘Seahawks’ will contend against the New England ‘Patriots’ for the NFL championship on Sunday, February 1, 2015. Sherman will star as the ‘Seahawks’ cornerback during the game.