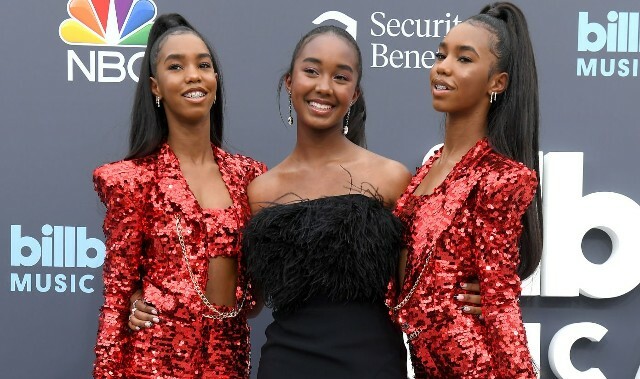 Sean ‘Diddy’ Combs had the support of his daughters, as well as his son Christian  Combs, at the 2022 Billboard Music Awards at MGM Grand Garden Arena on May 15, 2022 in Las Vegas, Nevada.  For the special family affair, twins D’Lila Combs and Jessie Combs hit the red carpet in sparkly red pantsuits while big sister Chance Combs wore a black mini dress.

“We like came up with the design and then Giovanna Lewis( she is so sweet), she made it for us. it actually came out perfectly,” the twins said of their outfits.

“We are just really excited to see what he has in store. We are just as clueless as everyone else,” Chance said prior to the show.

Sean “Diddy” Combs executive produced this year’s Billboard Awards. The iconic artist focused on “uncanceling the canceled” by bringing artists who have suffered public downfalls to the main stage. Travis Scott was one of several artists to perform at the ceremony.

“I made a request; I made a demand. I said my brother Travis Scott has to perform … And NBC said yes,” Diddy shared with the press days before the ceremony. “The mood of the show is about love and forgiveness,” Combs told Billboard. “As a musical family, none of us are saints; none of us are without things that happen to them in life. So one of the things I’m doing directly is un-canceling the canceled.”

Travis Scott’s performance was a form of rebooting his career after his highly-anticipated Astroworld Festival turned tragic last year. Ten individuals, including a 9-year-old child, died as a result of the chaos that ensued at the event in Houston. Sunday’s performance at the Billboard Awards was Scott’s first major public gig since the tragedy in September.

“I’m on an R&B mission,” Diddy said of his goal of returning to music with his Love Records label. “A mission to bring back a genre of music that had employed so many musicians and writers,” Combs shared. “I also want to bring back, you know, our soul. That’s a part of our culture. Not singing and sounding like computers to the point where we lose ourselves. So I’m here to bring back the R&B magic because R&B is love.”