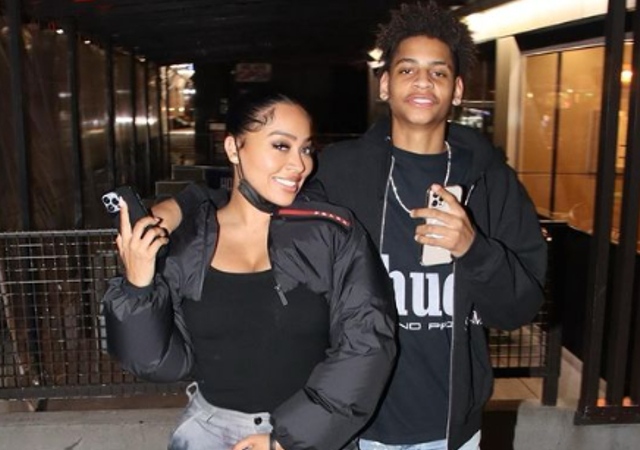 La La Anthony continues to cultivate her co-parenting relationship with her estranged husband, Carmelo Anthony. The television personality recently sat down with Charlamagne Tha God of the Hollywood Reporter series Emerging Hollywood to delve into her marriage and life after matrimony.

“It was a lot of pressure,” La La said of her and Carmelo’s marriage in the spotlight. “When it’s good, it’s good. And when it’s bad, it’s bad,” Anthony added. “When it’s bad, then everybody got something to say about it.”

La La Anthony filed to divorce Carmelo Anthony last year after rumors of infidelity on his part circulated. The Anthonys attempted to repair their marriage through counseling. La La, however, officially called it quits last June and cited “irreconcilable differences” as her reason for requesting marriage dissolution.

“Stepping away from that marriage was such an incredibly hard decision for me, but it made me realize there’s nothing I can’t do,” La La told Charlamagne. “Staying is easier,” Anthony revealed. “Walking away is harder,” she added. “I was with him when he was 19 years old, like that’s all I’ve known. To step away from that and try to build my own life and still keep my sanity and keep things normal for my son who only knew his mom and his dad together– that wasn’t the easier decision, but I had to make a decision for myself. So now it’s like, wow, if I could do that, I could do anything.”

La La and Carmelo may no longer be a couple but such does not mean the two do not work together to give their son stability. “We want to be a great example to our son,” La La shared during her segment on Emerging Hollywood. “We have open conversations with him. We tell him, ‘You were made from love.’ We’re still a family and we do things together. We go to his games together. We try to keep it as normal as possible.”

La La further explained why harmonious co-parenting is at the center of every interaction she has with her ex. “I don’t want my son to look at his parents like they didn’t get along. He’s looking at us as an example,” Anthony said. “I don’t want him to have dysfunctional relationships. I want him to be better when it comes to that,” the celebrity mom shared.

“I wanted to be a better example to my son than what I saw. And I didn’t necessarily do that,” La La Anthony admitted during her conversation with Charlamagne Tha God. “So that makes me sad,” she added. “It’s not my fault, but I wanted it to be different for him.

“He got to an age where he was seeing everything and reading everything. Like, ‘Mom, they’re saying this … my friends at school are asking me.’ So we had to navigate through all that. And the fact that I couldn’t necessarily protect him from that, still hurts me, but I try to make up for it in other ways, by just being open with him and still showing him a loving household co-parenting situation.”