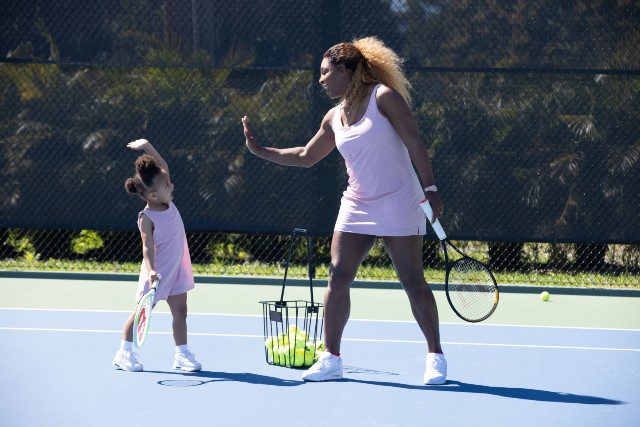 Serena Williams does not have the patience to teach her daughter, Alexis Olympia, how to play tennis. The Grand Slam champion recently admitted to Ellen DeGeneres that she would need to hire help if her daughter wanted to pursue a lifelong career as a tennis player.

“I don’t push her because I’m like, ‘She’s 4,'” Williams said of her daughter’s playing skills. Serena and her husband, Alexis Ohanian, enrolled their daughter in a program for tennis lessons several months back. The celebrity parents’ driving motivation for officially introducing their daughter to the sport was fun. “She’s alright,” Serena said of Alexis Olympia’s playing skills to date. “[But] I’ve seen 4-year-olds that might take her out,” the start athlete admitted.

Serena began her professional career as a tennis player when she was 13-years-old. She enrolled in a tournament in an effort to follow behind her big sister, Venus Williams, who was already making headway in the sport. Both Williams sisters revolutionized the sport and continue to build their legacies as two of the greatest tennis players in history.

Many assumed Serena would begin grooming her daughter for tennis as soon as Alexis Olympia was able to hold a tennis racquet. The sports champion, however, told Ellen during her recent interview that he is not too interested in teaching her daughter the ropes of the game.

“[I don’t] have the patience to teach tennis,” Serena admitted when speaking with Ellen. “I don’t really like to play with people who don’t know how to play tennis well. It drives me nuts,” Williams said. “So, I was like, ‘I can’t. I don’t have the patience for this,'” Serena shared. “So I signed [Alexis Olympia] up for a private teacher.”

Alexis may not be at the top of her game just yet. The youngster is, however, coming along in the sport quite well.

THE IMPORTANT BENEFITS OF TUMMY TIME