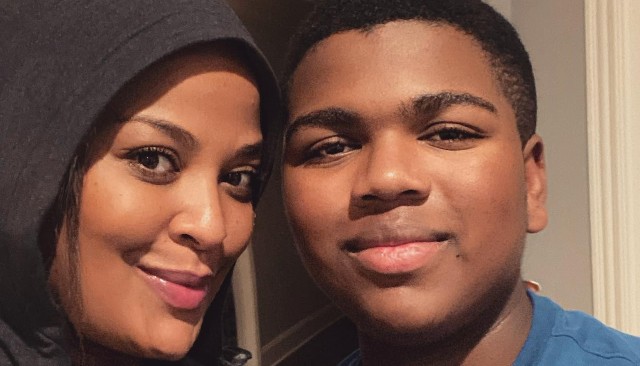 Laila Ali can’t believe how much her son looks like her late father, Muhammad Ali.

“I’m still amazed at how my boy looks just like my Dad…with a sprinkle of my husband too,” Ali wrote under  a photo of her and her son, Curtis Muhammad Conway Jr.

And many fans in the comments section noted the uncanny resemblance between young Curtis Jr. and his grandpa. One fan replied: Wowowow it’s Uncanny how much your son carries your Father in his face … and I can see Curtis too… but definitely u gave birth to your Dads face… beautiful pic!”

Laila Ali took after her esteemed father and became a world champion boxer, fighting from 1999 to 2007 and retiring with a 24-0 undefeated record.

“I actually did not even think about becoming not only an athlete, but a boxer until I saw women’s boxing on television for the first time when I was about 19 years old,” Laila shared in an exclusive clip from Shop Today With Jill Martin. “I was in awe and I couldn’t believe that I didn’t know that it was an opportunity available to me. That’s when I first got the idea to become a professional boxer.”

But if you assume the People’s Champion was thrilled to hear that his daughter was following in Dad’s footsteps, guess again.

“My dad was not happy about it,” Laila recalled. “He literally tried to talk me out of it. I had to prove him wrong. ‘Dad, I can understand why you feel that way, but just watch me.'”

After her retirement, Laila married former NFL player Curtis Conway and together they had Curtis and his younger sister, Sydney Conway.

Laila Ali loved and adored her father, who passed away in 2016, as did her children, especially Sydney. In October 2020, Laila posted a few photos of Muhammad Ali with his adorable granddaughter on Instagram and captioned the post: “We miss Papa! My daughter Sydney had a special connection with my father~They definitely met before this lifetime. And she always made sure to get her kisses and hugs in. LailaAli.com.”

Although Ali ended up following in her dad’s footsteps, and her husband Curtis was an NFL player, Laila revealed in 2016 doesn’t actually want her children taking after her, encouraging them to find their own path.

“We actually don’t pressure our kids when it comes to playing organized sports,” said Laila. “We do understand the benefits of sports, so we want them to stay active and participate in sports, but we don’t make them feel like they have to be athletes because their parents are athletes. We believe in seeing what it is your kids are interested in and nurturing that.”