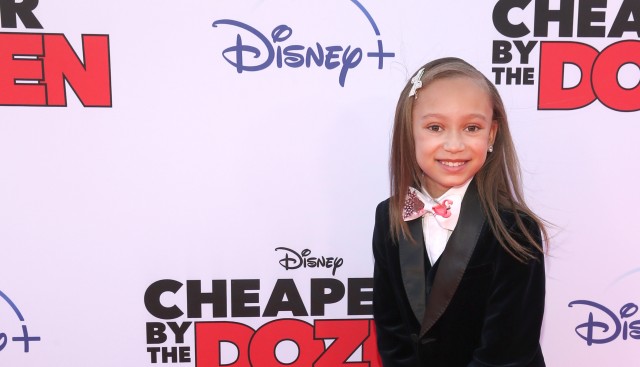 Mykal-Michelle Harris, Kyrie McAlphin, Leo Abelo Perry, among others recently attended the Cheaper By The Dozen premiere in Hollywood, CA at the El Capitan Theatre on March 16, 2022.

If Mykal-Michelle Harris’ face looks familiar, it most definitely should. The talented young rising star, in addition to Cheaper By The Dozen, has appeared in shows such as ABC’s Mixed-ish, the new season of Raven’s Home, as Alice Baxter, Big Little Lies, among others.

Harris’ stunning Monnalisa tuxedo was unquestionably eye-catching, yet her escorts won the night! The actress was accompanied by Daisy and Johnny, the Bakers’ on-screen dogs.

Kyrie McAlphin, who also stars in the film as eight-year-old Deja, hit the red carpet in purple, sporting her own design, custom-made by @shopjaggedhanger @_jackieoh.

The adorable young actress said in an Instagram post showing off her style, “Dreams do come true! Fun night on the red carpet for the premiere of #cheaperbythedozen directed by @gail.lerner.”

Stealing the style spotlight on the red carpet in Gucci was Leo Abelo Perry. “We worked pretty hard to find a suit that was sustainably made. Thank you @gucci for coming through with this amazing suit. The Gucci Kids line uses fabrics that are sustainable and reusable,” Perry posted on social media. “And of course had to rock @nike sneaks, also made with sustainable materials.”

Not only was Perry stylish, but environmentally conscious with his style as well. Perry portrays Luca, one of the Baker siblings in the upcoming film.

These are just three of the talented stars that hit the red carpet in amazing fashion. Check out pictures of others below! Let us know which look was your favorite.

Cheaper By The Dozen is a funny and heartwarming story about the raucous exploits of a blended family of 12, the Bakers, as they navigate a hectic home life while simultaneously managing the family’s restaurant, 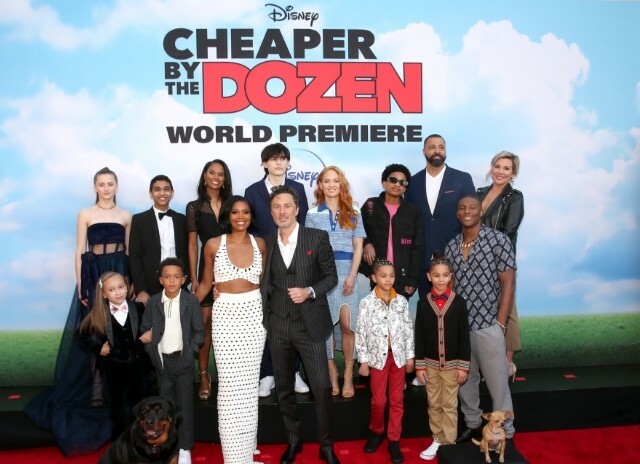 It is directed by Gail Lerner with a screenplay by Kenya Barris & Jenifer Rice-Genzuk Henry based upon the novel by Frank Bunker Gilbreth, Jr. and Ernestine Gilbreth Carey. Kenya Barris is producing, with Shawn Levy, Gabrielle Union, Brian Dobbins and Donald J. Lee, Jr. serving as executive producers of the film.

The anticipated film premieres on Disney+ on Friday, March 18, 2022!