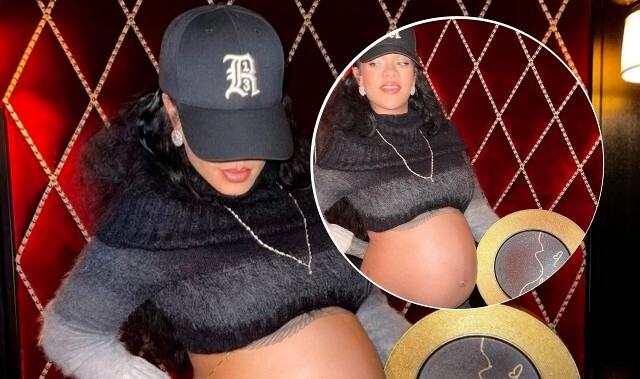 Rihanna enjoyed a meal at Cesar restaurant in Paris, France, this past weekend. The pregnant singer was accompanied by her brother while rocking apparel that showed off her bare stomach. Some were happy to see Rihanna in her maternal element, which is more edgy than some. Others, however, expressed discontent in the way the ‘Umbrella’ singer dressed.

“Ok,ok, [you’re] not the first to have a baby,” one critic wrote online after seeing what Rihanna wore to Cesar restaurant. “Cover up before you and the baby catch pneumonia,” the commenter added. “Please and thank you!” Another fan said, “You’re absolutely beautiful but please stop exposing your stomach.”

Rihanna has said on more than one occasion that she aims to bring sensuality to her pregnancy experience. “Right now I’m really into pushing the idea of sexy,” Rihanna said during a recent interview. “When women get pregnant, society tends to make it feel like you hide, hide your sexy, and that you’re not sexy right now [but] you’ll get back there and I don’t believe in that sh*t,” the celebrity explained.

“I’m trying stuff that I might not have even had the confidence to try before I was pregnant,” Rihanna revealed to the press. “The strappiest, the thinnest, and the more cut-outs the better for me,” the singer shared.

Some appreciate what Rihanna is doing with regard to sensuality and expectancy. Others, however, would much rather stick to more traditional maternal styles.

“Enuff is Enuff (sic),” one critic recently said when expressing their dislike in Rihanna’s latest maternity outfits. “There’s a time for everything,” the Internet user continued. “We all know that you’re pregnant. Pregnancy is something you can’t hide. Have some class, dignity and respect for yourself. My goodness”

Rihanna announced her expectancy with rapper A$AP Rocky a few weeks ago by wearing an outfit that showed off her bare baby bump. The celebrities are looking forward to their little one’s arrival later this year.