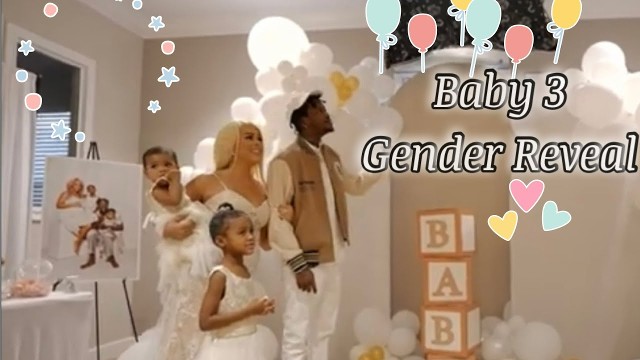 D.C. Young Fly and Jacky Oh are expecting a baby boy! The celebrity couple learned the gender of their unborn child earlier this week.

Jacky Oh shared footage from her and D.C. Young Fly’s gender reveal party, which featured the celebrities’ close family members gathering for a day of fellowship and fun. D.C. carried the theory of his wife carrying a baby girl up to the moment that the blue balloons indicated a boy. “I just know,” the expectant father said when asked why he thought Jacky Oh was pregnant with a girl. D.C. Young Fly displayed a look of shock after seeing the blue balloons.

“Third time is a charm,” Brittney Elena said in answer to Jacky Oh’s poll in which she asked her fans if they thought she was carrying a boy or girl. “I already said I’m guessing Boy,” the actress added. “I hope I’m finally right this time.” Another fan went off D.C. Young Fly’s prediction and wrote, “It’s a girl. D.C. already said summ (sic).”

Jacky Oh and D.C. Young Fly announced their expectancy of a child a few days ago. Jacky shared a video clip in which she and D.C. shared the exciting news of the family’s expansion with their daughters. One of the couple’s kids told her mom that she knew about the pregnancy. “Did you know that,” Jacky asked her little one.

Some know both Jacky Oh and D.C. Young Fly from their days on Wild ‘N Out. D.C. was the comedian that brings laughter to the masses, while Jacky was the influencer who is both lively and beautiful.

“We started dating right after the show wrapped,” Jacky Oh recently said in reference to how she and D.C. Young Fly began their courtship. “I flew back to California, he flew back to Atlanta,” the celebrity shared. “I think I flew to Atlanta the next week.”

Traveling back and forth to see one another ultimately evolved into a solid relationship that includes two daughters and a son on the way. Jacky Oh and D.C. Young Fly are expecting their baby boy to arrive in the coming weeks.