Home » NEWS » THE COMBS TWINS SHOW OFF THEIR CHEERLEADING SKILLS 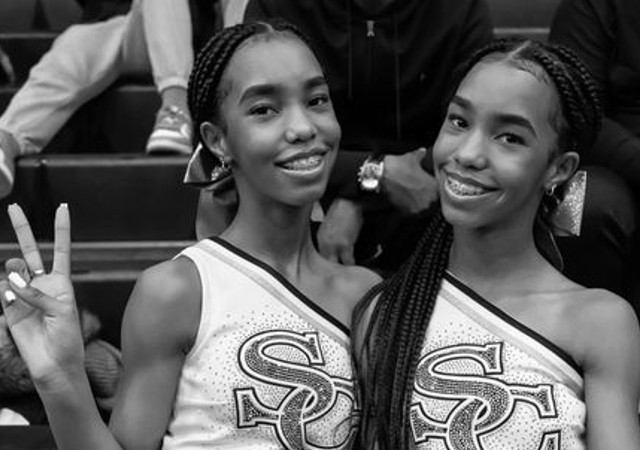 The Combs twins, Jessie and D’Lila, are making their mark as cheerleaders at their school. Sean “Diddy” Combs’ daughters recently uploaded a candid of themselves posing while in uniform.

“We are SC,” Jessie and D’Lila captioned underneath the candid. “Hey now,” Tiffney Cambridge wrote in response to the Combs twins’ captions and pictures that featured them in action. “Absolutely beautiful,” another fan said.

Jessie and D’Lila are following in the way of their mom, Kim Porter, as fashionistas. It was just a few months ago that the twins shared their desire to become fashion designers like their late mother.

“Happy Birthday to the best mom/role model in the world,” Jessie and D’Lila wrote in honor of what would have been their mom’s fifty-first birthday. “We want to be just like you when we grow up,” the twins wrote online.

Jessie and D’Lila have already entered the fashion scene as the twins walked the catwalk at the Dolce and Gabbana fashion show last August. Diddy was the doting father who shared several pictures from the event. “Words can’t explain,” the celebrity father said in a post shared online.

The Combs twins also commented on the experience. “This is literally a dream come true,” Jessie and D’Lila told their social media fans. “We are so excited that we got to walk in the @dolcegabbana fashion show,” the twins shared. “Thank you so much for having us join the show in Venice, Italy. And we want to say a HUGE Thank You to our dad and team for helping us get through this amazing show. WE LOVE YOU GUYS AND THANK YOU. We hope to be back soon.”

Jessie and D’Lila are two of three children Diddy has with the late Kim Porter. The Hip Hop mogul fathers six kids – Jessie, D’Lila, Chance, Christian, Quincy, and Justin – in all.

KEVIN HART'S 'MARCUS MAKES IT BIG' COMES OUT THIS SUMMER

KEVIN HART'S 'MARCUS MAKES IT BIG' COMES OUT THIS SUMMER