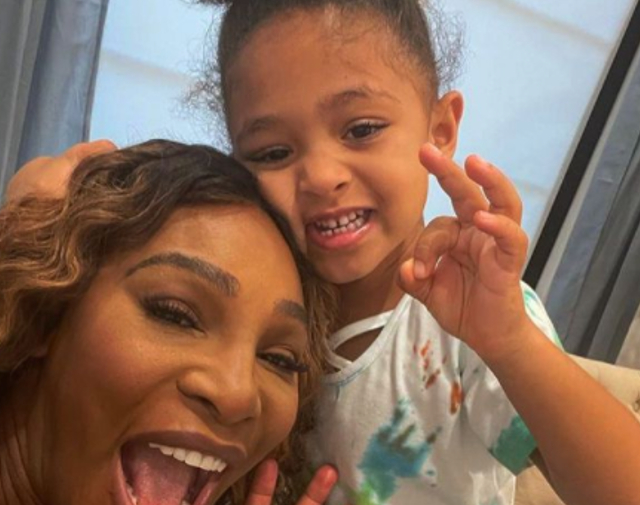 Alexis Olympia is following in her mom’s footsteps by training to become the next great tennis star. Serena Williams’ daughter was recently filmed while practicing on the tennis court and the youngster’s playing abilities were quite impressive for her age.

Alexis Olympia, who turned 4-years-old last September, exhibited great skill while handling the racquet and controlling her shots. The little one followed through with her hits and remained focused on every play. “Practice makes progress,” the caption underneath Alexis Olympia’s video clip read.

“Not her backhand already looking better than mine,” one social media follower said after viewing the segment of Alexis Olympia practicing on the tennis court. “The future looks bright already,” another fan said. “Can’t wait to see,” yet another of Alexis Olympia’s supporters agreed. “Y’all see that swing and toe point,” the supporter asked the others in the comments section of the Instagram post.

It indeed appears that Serena Williams may be grooming her daughter to play tennis professionally as desired by Alexis Olympia. The tennis champion recently told E! News that she would not force her little one to play the sport.

“I have no interest in her playing full-time. Unless she does. So, it’s not like that at all,” Serena said regarding Alexis Olympia starting tennis lessons. “It’s just playing for fun and staying active in a COVID world when we didn’t know what to do,” Williams added. “So that’s kinda the only reason I started her doing that,” the tennis star said in reference to her daughter’s private tennis lessons.

Alexis Olympia also plays the piano and enjoys fashion. “She only wears dresses and she loves to wear heels, so it’s kind of fun,” Serena told E! of her daughter’s sense of style. “Because when I was younger, I used to love wearing princess dresses as well,” the celebrity added. “To see, like, my personality is kind of interesting.”

TOYA JOHNSON'S DAUGHTER, REIGN RUSHING, IS PROVING TO BE HER 'MINI-ME'

TOYA JOHNSON'S DAUGHTER, REIGN RUSHING, IS PROVING TO BE HER 'MINI-ME'