Home » NEWS » TOYA JOHNSON’S DAUGHTER, REIGN RUSHING, IS PROVING TO BE HER ‘MINI-ME’

"When I Say Your Kids Mimic Everything" 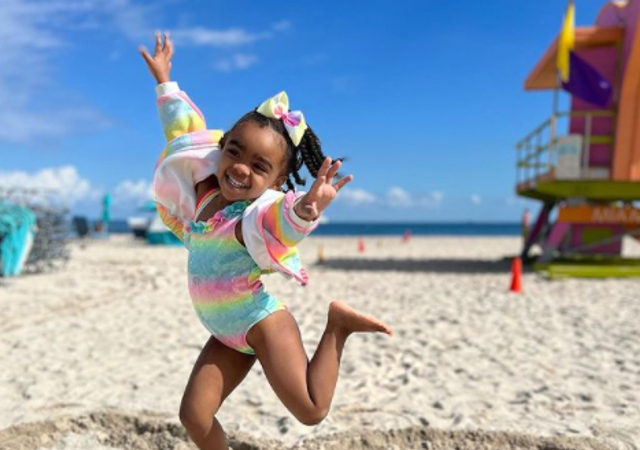 Reign Rushing is her mother’s daughter! Toya Johnson shared a video clip of her daughter at home that was nothing short of cute and exemplary of what Reign sees her mom do every day.

In the clip, Reign’s father, Robert Rushing, asked his daughter why she removed her shoes before entering her mini home. “Why did you take your shoes off,” Robert asked his and Toya’s little one. “It’s snowing outside,” the celebrity father said.

Reign answered her father by telling him that she removed her shoes because she was entering her home. “But why would you take your shoes off,” Robert inquired again. “Because [the snow is] going to get all over my house,” Reign told her father. “And my baby doll is all wet,” the little one added. “Now I have to clean up this room.”

Toya commented on her daughter’s actions in the video, which garnered more than one million views online in less than 24 hours, by admitting that Reign was only doing what she saw her mom do on countless occasions. “When I say your kids mimic everything you [do],” Toya told her social media followers. “This is so me,” the celebrity mom mused. “I don’t like shoes in the house and I clean up all day.” Toya’s oldest daughter, Reginae Carter, shared laughing emojis in the comments section of the post.

Reign Rushing mimics her mom but is also a daddy’s girl. It was just a few days ago that Toya Johnson uploaded a video clip of her “mini-me” clinging to her father. “Y’all are so annoying,” Toya jokingly said at the sight of her daughter and fiance giving each other loads of affection. “I need a son,” Johnson added. “Where’s my hug,” Toya asked Reign. “You’re hating on us,” the celebrity mom’s daughter replied.

“Don’t worry,” Toya wrote in the caption of her post. “When the good Lord bless me with my son I’ll experience this type of bond,” the celebrity mom said. “My kids are daddy’s girls,” Toya added in reference to both Reign and Reginae. “I have to get in where I fit in,” Johnson concluded.

RAY J WANTS TO BE THE 'BEST FATHER FOR MY KIDS'

RAY J WANTS TO BE THE 'BEST FATHER FOR MY KIDS'