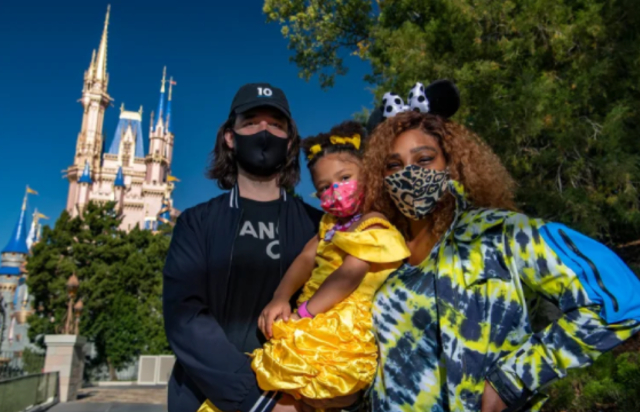 The adventures of Alexis Olympia include trips to Disney World and a palace visit. The youngster was recently photographed while spending time at Château de Versailles with her parents.

Little Alexis was photographed while wearing a costume fit for a Disney princess. The youngster smiled while striking poses inside and outside of the palace. “It’s the left foot for me,” one social media follower wrote in reference to Alexis Olympia’s stance in which she slightly raised her left foot for the candid. “Beautiful as always,” another fan said.

Alexis Olympia wore the same gown during a recent trip to Disney World with her parents, Serena Williams and Alexis Ohanian Sr. The youngster enjoyed a bit of rest and relaxation at Magic Kingdom Park, which also proved exciting for Serena.

Alexis has been quite busy trying new things with the help of her parents. Not only is Serena grooming her daughter to follow in her footstep as a tennis champion, but Alexis Ohanian Sr. steadily encourages his daughter to follow his lead in taking risks. In fact, it was just a few days ago that the entrepreneur jumped off a diving board to show his daughter that she, too, would be able to do the same one day.

“Olympia *desperately* wanted to jump off the diving board, but she’s only 3,” Alexis Ohanian said of the event. “So I let her live vicariously through me,” the celebrity father added. “I want her to know her voice has power and she uses it for good. Only one Olympian parent in this fam, though,” Alexis said in reference to his wife who has won four Olympic gold medals during her career.

It seems that Alexis Olympia has many options when it comes to career moves in later years. The youngster is Serena Williams and Alexis Ohanian Sr.’s only child.

CARDI B CONFIRMS SHE IS PREGNANT WITH SWEET MATERNITY SHOTS

CARDI B CONFIRMS SHE IS PREGNANT WITH SWEET MATERNITY SHOTS