SCOTTIE PIPPEN BEAMS IN PHOTO WITH HIS YOUNGEST KIDS 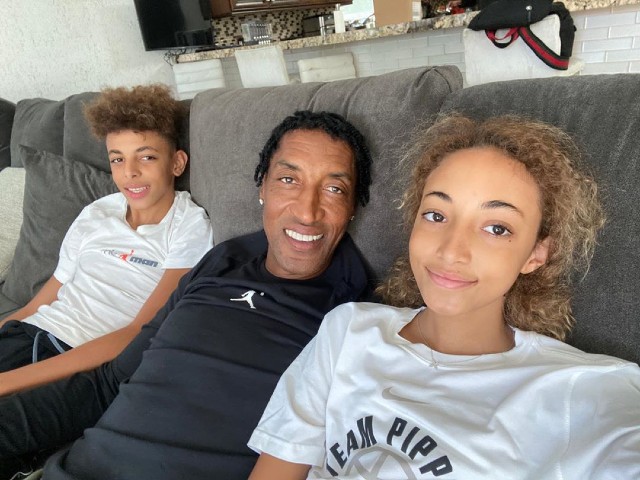 The sweet family photo shows Scottie and his children sitting on a couch together with smiles on their faces. He captioned the photo: “🙏🏿 ❤️.” Sophia Pippen wore a Nike shirt that said “Team Pippen,” while Scottie and Justin ironically both wore “Jumpman” shirts, which is part of the Jordan Brand, a billion-dollar clothing line created by Scottie’s legendary teammate Michael Jordan.

Scottie Pippen shares Justin and Sophia with his ex-wife Larsa Pippen along with his eldest son, 19-year-old Scotty Pippen Jr., and 18-year-old Preston Pippen. Scottie also has three adult children, Antron, Sierra, and Taylor Pippen, from three previous relationships. Justin Pippen (along with Scotty Jr. and Preston) takes after his famous father and plays basketball at Sierra Canyon High School in California, while Sophia has a modeling career like her mother.

Although Scottie and Larsa Pippen divorced in 2018 after 21 years of marriage, they both make sure to care for their children. The Pippen family recently celebrated Preston’s 18th birthday on August 26 and Scottie, Larsa, and Sophia posted birthday wishes on their respective social media.

Scottie Pippen posted a couple of photos of Preston on Instagram and wrote in the caption: “This kid’s got so much heart and soul. Happy birthday, @prestonpippen!” Larsa posted a family photo of the Pippen family in masks and captioned the post: “Hbd @prestonpippen we love u so much ❤️. The love is real.”

Sophia Pippen also wished her big brother a Happy Birthday on Instagram, sharing a throwback photo of them and captioning the post: “Happy birthday @prestonpippen love you!!” Preston thanked his friends, fans, and family for their birthday wishes on Instagram, writing: “Love to see it ❤️🔞 thanks for all the bday wishes.”