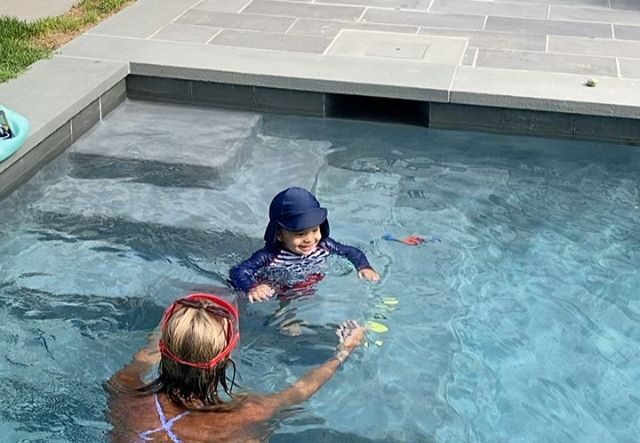 Tamron Hall’s son, Moses Greener, is swimming at just 16-months-old! The talk show host shared footage of her little one swimming wit his instructor that showed just how much Moses was getting the hang of things.

It did not take Tamron’s son long to follow through with what his teacher was conveying. In fact, the little one smiled while kicking and swimming in the pool. “Summer goal met,” Tamron told her Instagram fans. “Confident in the pool,” the television personality added.

The Tamron Hall Show made its debut in September 2019. Tamron recently reflected on her show’s success during an interview with The Hollywood Reporter.

“It was important for me to make sure that the show reflected what I felt and feel I can bring to the table because I didn’t want to come back with a show that didn’t make you proud,” Hall shared in reference to her fans who supported her bold move to leave TODAY. “I wanted a show that would make my mom proud. Everybody who rooted for me, I wanted you to turn on the show and [make you proud].”

Moses Greener is Tamron Hall’s only child with her husband, Steven Greener. He celebrated his first birthday in April. Stay tuned for more celebrity mom news!

SCOTTIE PIPPEN BEAMS IN PHOTO WITH HIS YOUNGEST KIDS

SERENA WILLIAMS' HUSBAND AND DAUGHTER SUPPORT HER AT US OPEN

SERENA WILLIAMS' HUSBAND AND DAUGHTER SUPPORT HER AT US OPEN