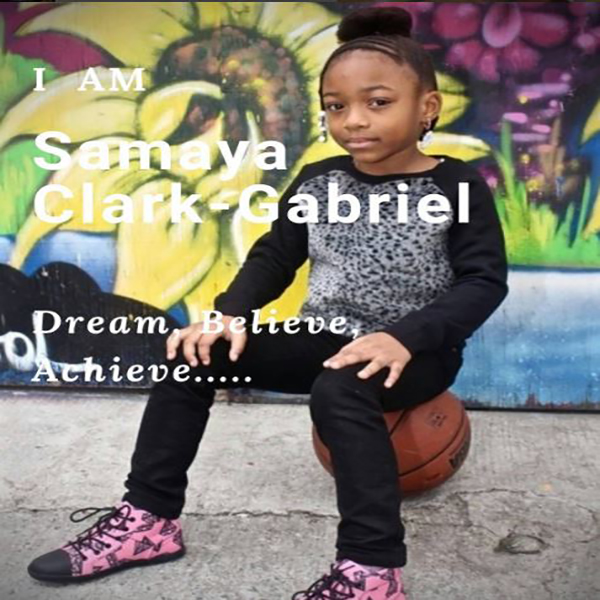 Born in Brooklyn, NY, seven-year-old Samaya Clark-Gabriel demonstrated from an early age that she had an athletic prowess like no other. With speed, agility, and coordination, Clark-Gabriel has gone on to dominate not only the soccer field, but the basketball court as well, proving that #girlpower is indeed real.

This young, budding, super-athlete started playing intramural soccer at the age of four-years-old for the Brooklyn Patriots. Within a year, she was promoted to the U8 travel team division, ultimately receiving recognition for her outstanding athleticism in the form of Athlete of the Year but, that was just the beginning. In 2016, Clark-Gabriel went on to lead the Brooklyn Stars Soccer Academy to their first league championship.

After completely dominating the soccer field, Clark-Gabriel expressed interest in basketball and went on to make history in the sport, becoming the youngest student ever to be admitted to her school’s basketball program, competing against students much older than she. Clark-Gabriel has been featured on CBS Sports, MSN Sports, Yahoo Sports, USA Today, News 12 Brooklyn, Sportscenter, ESPNW, Chasing News, BricTV, The NY Post, Fox 5 NY, Ruptly TV in Russia, and many more.

When not on the court or field, Clark-Gabriel is excelling in the classroom. As a second-grader, she has been awarded many outstanding performance certificates, especially in Math and English.  What’s this fun-loving, carefree, rising athletic superstar’s ultimate dream-to play college basketball and become an Olympic Gold Medalist in….wait for it…gymnastics! We have no doubt that she will. To follow this amazing athlete’s journey, click here. In the meantime, check out one of her many awe-inspiring videos below.

BLAC CHYNA IS ENJOYING A 'FABULOUS LIFE' WITH HER KIDS

BLAC CHYNA IS ENJOYING A 'FABULOUS LIFE' WITH HER KIDS