Gone With The Wind Fabulous!

by Sarie
in NEWS, Upcoming
0 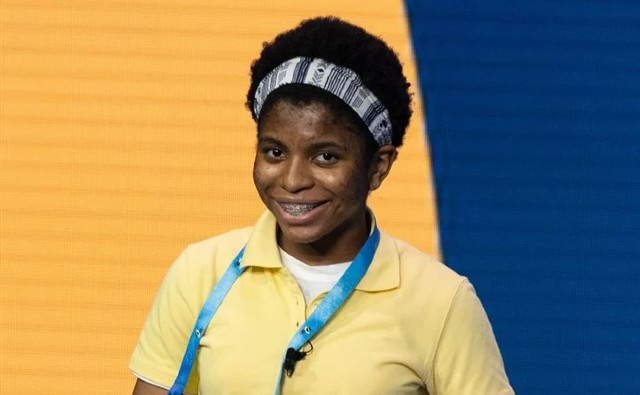 Zaila Avant-garde became the first African American contestant to win the Scripps National Spelling Bee on Thursday (July 8). The 14-year-old from New Orleans, Louisiana, gave a twirl after realizing she won the competition.

Murraya, a genus of flowering plants in the citrus family, was the winning word for Zaila. The teen associated the plant with famous comedian Bill Murray whose last name has similar spelling. One has to, of course, add an “a” at the end of Murray’s name for the correct spelling of the plant.

Zaila endured several other rounds before taking the win in the final segment. The word “Nepeta” was especially difficult for the young scholar to spell.

“It would have been really bad if I had gotten knocked out then because I would have been kicking myself because I knew everything about the word except exactly how to spell it,” Zalia shares with the press. “I was pretty relaxed on the subject of Murraya and pretty much any other word I got,” she adds.

Her success in this year’s National Spelling Bee is just one of many ways Zaila shines in life. The youngster is also quite the basketball player and a three-time Guinness World Record holder.

“I kind of thought I would never be into spelling again, but I’m also happy that I’m going to make a clean break from it,” Zaila says when discussing her plans going forward. “I can go out, like my Guinness world records, just leave it right there and walk off,” the teen says.

Zaila Avant-garde is with her dad Jawara in the photo, who changed her last name to Avant-garde in honor of jazz musician John Coltrane". Zaila only pic.twitter.com/U1KSLgVeer

Zaila practiced for seven hours at a time in preparation for the Scripps National Spelling Bee. She now plans to focus on other ambitions such as attending Harvard University and playing for the NBA one day. “I’ll find something else to do,” the Louisiana teen tells the press. “Trust me.”

MARSAI MARTIN TALKS CONFIDENCE AND SELF-CARE WITH YAHOO'S "THE UNWIND"