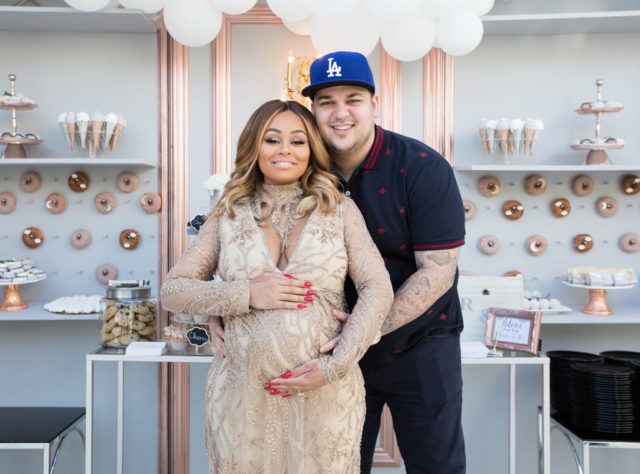 Are Blac Chyna and Rob Kardashian planning to share their birthing experience with the world? Yes, according to inside sources. TMZ reports that the celebrity couple is planning a baby special that will take viewers inside of the delivery room.

“Production sources tell us Rob and Chyna are scoring several hundred thousand dollars for a baby special, which will include footage of the birth, along with Chyna’s baby shower and other events leading up to delivery,” the media source states. “The show will also chronicle the first few days after the baby is born.” While it is uncertain how much footage will focus on the labor and delivery process, it appears that the special television spot is a go.

Rob Kardashian and Blac Chyna have been making the most of their expectancy since sharing their joy with fans several months back. In fact, it was just a few weeks ago that fans watched as Chyna’s friends create a mold of her protruding stomach. “The best thing about being pregnant is knowing that you’re growing a life inside of you and just watching your body change,” the reality star said. “I really wanted to do this belly cast to preserve this precious moment and hopefully I show my baby girl when she gets older.”

The businesswoman’s princess will definitely have her family’s history at her fingertips. Blac Chyna shared the motivation behind her and Rob becoming acquainted with one another during an interview with Elle in August. “When I linked up with Rob, he was at a point where nobody could really help him,” the expectant star revealed. “But I’m the type of person that likes to motivate my friends and help them figure out how they can do better. That’s how we really started off.”

What began as motivation has morphed into love. Blac Chyna and Rob Kardashian are expecting their little one to arrive in coming weeks. The couple’s daughter will join King, Blac Chyna’s son from previous relations, at home.

Be on the lookout for more details surrounding Rob and Chyna’s birthing special!

KELLY ROWLAND AND SON ENJOYED 'HALLOWEEN AT THE WHITE HOUSE'

TATYANA ALI ON MOTHERHOOD: 'THERE ARE SO MANY THINGS I WANT TO SHOW HIM'

TATYANA ALI ON MOTHERHOOD: 'THERE ARE SO MANY THINGS I WANT TO SHOW HIM'