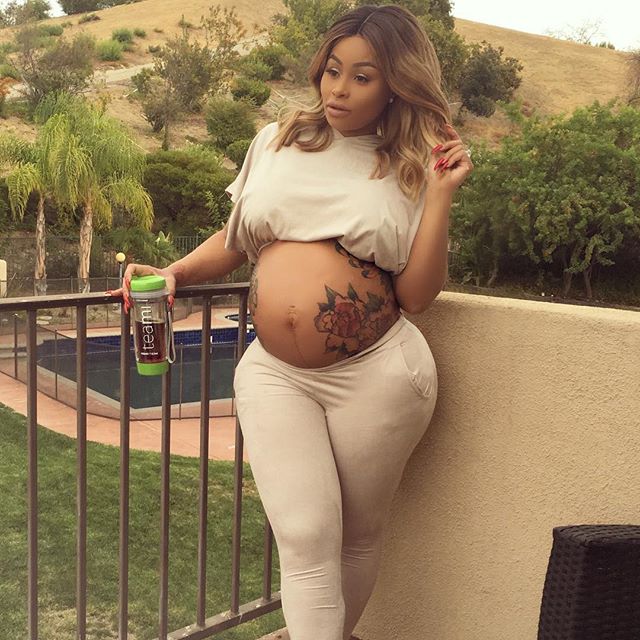 The countdown is on for Blac Chyna who is expecting her little one to arrive next month. The expectant star shared her due date with Instagram fans on Wednesday.

“Drinking @teamiblends Skinny tea, as it gives me great energy plus it’s perfectly safe while pregnant,” Chyna wrote. The reality star also uploaded a picture of herself posing while holding a bottle of the tea. Chyna’s stomach was on full display as the star owned the crop-top style.

“Can’t wait to do the @teamiblends detox after I give birth to my lil girl ,” the celebrity added. “36 weeks pregnant 4 weeks to go.”

Blac Chyna has been transparent throughout her expectancy. Fans got to see the star mom hanging out with her friends on the most recent episode of Rob & Chyna. The celebrity let her pals create a mold of her protruding stomach in hopes of giving her daughter a keepsake.

“The best thing about being pregnant is knowing that you’re growing a life inside of you and just watching your body change,” she explained on the show. “I really wanted to do this belly cast to preserve this precious moment and hopefully I show my baby girl when she gets older.”

Chyna’s expectancy has certainly come with its share of drama. It was just a few days ago that Rob Kardashian’s sister, Khloe, cleared the air about Blac Chyna sharing Rob’s number on Twitter. “There were two baby showers and Chyna was invited to both of them. But we wanted to have a DILF shower,” Khloe told Ellen DeGeneres. “It was a surprise for him, but it was a surprise so he didn’t know that portion, so he took it the wrong way. But he didn’t show up so he didn’t know it was a male baby shower. But Chyna was in on it. She knew it was for guys. So that’s why Chyna tweeted out his number.”

Regardless of the bumps in the road, Blac Chyna and Rob Kardashian are expecting their first child to arrive on November 16, 2016. The little princess will make Chyna mom for the second time as she already has a son named King with ex-boyfriend Tyga.

HALLE BERRY: 'I'M NOT AT ALL ASHAMED OF MY CHILDREN'

HALLE BERRY: 'I'M NOT AT ALL ASHAMED OF MY CHILDREN'