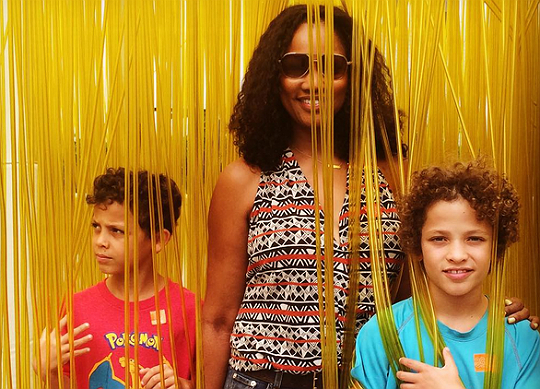 School is almost back in session and the Nilon boys have lots of stories to tell. Jaid and Jax recently visited the Los Angeles County Museum of Art with mom Garcelle Beauvais as part of their summer extravaganza.

“Hanging out at #LACMA today #familytime #summer #jaxandjaid #art,” shared Garcelle along with a picture of her and the boys at the museum. The actress and her kids also stopped by the La Brea Tar Pits, which is something that Garcelle has never done since living in Los Angeles. “Can’t believe all these years I’ve lived in Los Angeles I never went to the La Brea tar pits, it is so amazing we had the best time!!! I recommend it for anyone who’s in LA to take the kids.”

Beauvais has been hard at work with several projects, which include promoting her children’s book series. She and her sons have been traveling the country and spreading the word about the latest installment entitled I Am Living in 2 Homes. The story explores divorce from a child’s perspective with Jay and Nida as central characters.

Jaid and Jax are Garcelle Beauvais’ kids with ex-husband Mike Nilon. The actress also has an adult son named Oliver from a previous relationship.

A CELEBRITY BABY BLOG: 'IT'S ALL ABOUT THE FINISH LINE, BABY'

A CELEBRITY BABY BLOG: 'IT'S ALL ABOUT THE FINISH LINE, BABY'