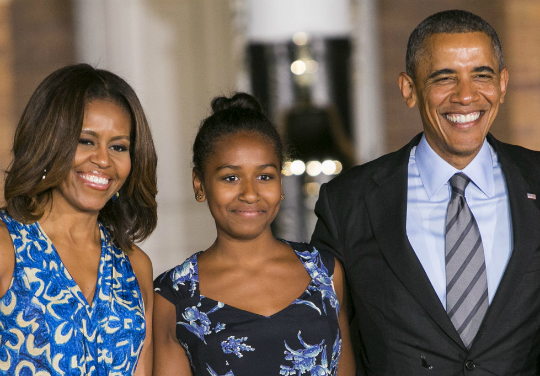 In 2008, at the age of 7, Sasha Obama (alongside big sis Malia) became the youngest child of the White House in nearly 50 years. But last month, on June 10th, the White House youngster officially entered her teen years. Of course, the milestone was marked by a very special celebration. Sasha and friends attended a One Direction concert in Washington, and then headed to NYC for some shopping (as First teens do).

Only a few weeks later, fittingly on the 4th of July, Malia Obama celebrated a milestone of her own – her Sweet 16. The celebration took her and a friend to Disneyland, and it’s been reported that her special gift was… (drumroll)

Back in February, Mrs. Michelle Obama announced her daughter had earned a learner’s permit, and even joked that Washington drivers need to watch out. However, the permit comes with its own set of restrictions and does not allow for Malia to drive without a licensed adult present.

Although the girls are quite literally growing up in the White House throughout their father’s ongoing two terms, and subsequently living in the public eye, the president and his wife are proud to say they do their best to give the girls the normal life they crave. While many Presidents have been fathers, very few have had the task of raising children during their Presidency.  The First Lady explained, “We fight everyday to help them be normal. You know? Now they’re teenagers, so now there are dances, and there’s driving, and there’s homecoming, spring break. It’s all the things that any parent is dealing with with teenagers except you have to manage details like security, staffing.”

And, like any teenagers, it seems the girls are growing up right before our eyes. We send them many birthday wishes!