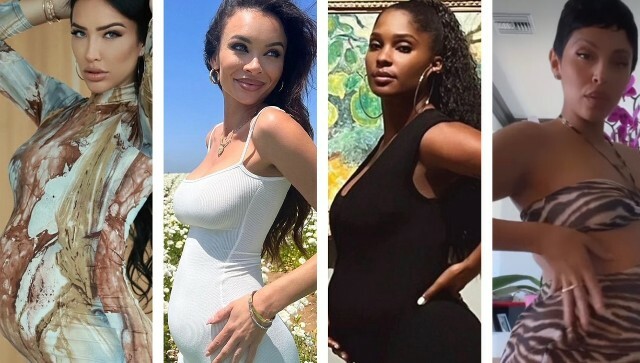 Nick Cannon recently shared that he has multiple children on the way. The entertainer did not specifically identify the mothers of his unborn children but promised to have more babies in 2022 than he welcomed in 2021. Now, fans are wondering, who will have Nick Cannon’s baby next?

Supporters and critics know for certain that Nick is expecting a child with model Bre Tiesi. The celebrity father confirmed his fathering a child with the influencer earlier this year. Some accused Nick of going back on his vow of celibacy after hearing he was expecting a child with Bre. The entertainer, however, adamantly defended his abstinence from sexual intercourse by telling the press that it was after Bre revealed her pregnancy that he decided to become celibate.

“That was the reason why I started my celibacy journey back then,” Nick shared. “Celibacy did help me through the journey of getting one with myself and being able to deal with this,” Cannon shared.

Fans were settling into the notion of Nick expecting baby number eight when Abby De La Rosa, who has twin sons with the entertainer, announced her pregnancy last week. It did not take long for fans to connect the dots and conclude that Nick Cannon was the father of what will be her third child. “He’s making a joke out of these women,” one social media follower scrutinized after getting wind of Abby’s expectancy.

Alyssa Scott, whose son with Nick Cannon passed away at five-months-old last December, is also rumored to be pregnant after sharing a candid of herself showing off her baby bump. The candid could have been a throwback photo as Alyssa’s post was in honor of Mother’s Day and included her daughter. Still, fans were convinced she was pregnant with what could be Nick’s ninth child.

Nick’s ex, Lanisha Cole, is expecting a child as well. She took to Instagram a few weeks back to celebrate the impending birth of her little one. Lanisha gave no indication of Nick being the father of her unborn child. Still, fans and critics assumed.

“So, Nick knocks up Bre while Alyssa is helping her baby battle brain cancer,” one fan theorized. “Then, he knocks up Abby at the time Alyssa’s baby passes away,” the social media follower questioned. “These folks are zero class.”

Nick Cannon and Bre Tiesi are expecting their little one to arrive any day.