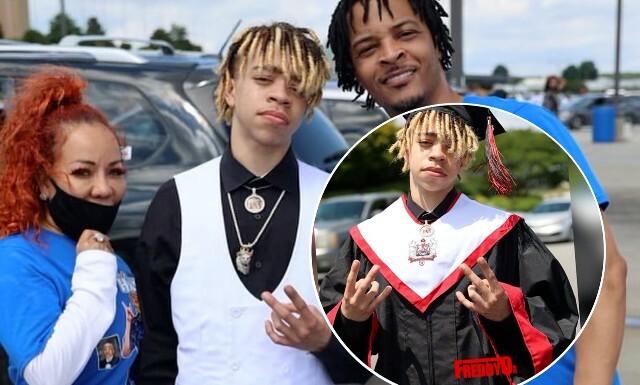 Harris’ mom, Tameka ‘Tiny’ Harris, commemorated the occasion by sharing a series of photos on Instagram of King in his cap and gown.

T.I. took to social media on Thursday to congratulate his son and to reveal how shocked he was to learn that King would be graduating with honors.

T.I. wrote, “Shocked the sh*t outta me. Celebration is definitely in order. Twin did it‼️ @the_next_king10 Graduates tomorrow… WITH HONORS. Say what you want about him… but can’t say he ain’t handle his business. #ProudPops. Congratulations King. We love you,& We proud of you. Don’t stop…Keep growing.”

The proud papa also shared a certificate showing that King had received all A’s and B’s in the first semester of the  2021-2022 school year.

Last month, King Harris revealed that he had completed high school earlier in the year.

He wrote, “So y’all gon’ shut up now or y’all still want troll and sh*t,” King asked his critics. “Told ya I’m OUTTA DER,” he added. “Been graduated since the beginning of da year,” the young artist continued. “H*ll is ya doin’,” King asked.

Many fans were surprised that the teenager had already finished high school given that he has spent the past couple of years on launching his music career.

As of today, Harris has over 700,000 followers on his the_next_king10 Instagram account and released a couple of albums under the rap name Kid Saiyan.