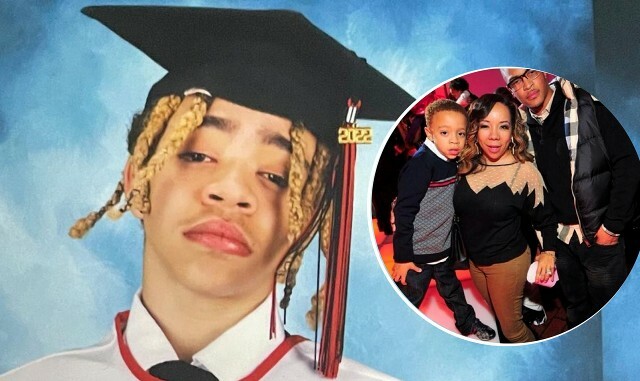 T.I. and Tiny Harris’ son, King Harris, wants you to know that he finished high school. The young artist took to Instagram this past weekend to share his accomplishment with fans and to also address critics who alleged he did not finish school.

“So y’all gon’ shut up now or y’all still want troll and sh*t,” King asked his critics. “Told ya I’m OUTTA DER,” he added. “Been graduated since the beginning of da year,” the young artist continued. “H*ll is ya doin’,” King asked.

Some alleged King Harris was no longer attending school in light of his career taking off. Such accusations, however, were never based on facts and were consistently refuted by King.

It was just three years ago that King petitioned his parents to let him get his education by way of homeschooling. “I need my career to start now because if it don’t … I’ll be rushing to get it later,” King said as a way to defend his desire to be homeschooled during an episode of T.I. and Tiny: Friends and Family Hustle. T.I. strongly disagreed.

“You don’t say when it’s time for your career to start,” the celebrity father told his son during the episode. “You ain’t put in the work,” T.I. exclaimed. “You are a child!” King became visibly angry at his father’s opinion and stormed out of the room. Tiny Harris was open to the notion of King homeschooling. The public majority, however, sided with T.I.

“T.I. is absolutely right,” one fan exclaimed. “In order for one to ‘get to it’ you must go through it,” the supporter continued. “And once you go through it one must ‘grow through it.’ There’s (sic) levels to this. There’s (sic) no such thing as an overnight success!”

Another fan said, “I’m not against homeschooling a child at all but I agree with Tip about the coddling. His reason for wanting to be home-schooled is so he can do music. So if he was homeschooled, and that gets in the way of his music, then what? Is he going to cry his way out of that too? Nah.”

King remained in a traditional school setting for the remainder of his general education experience. He continues to build his career as a rapper post-graduation.