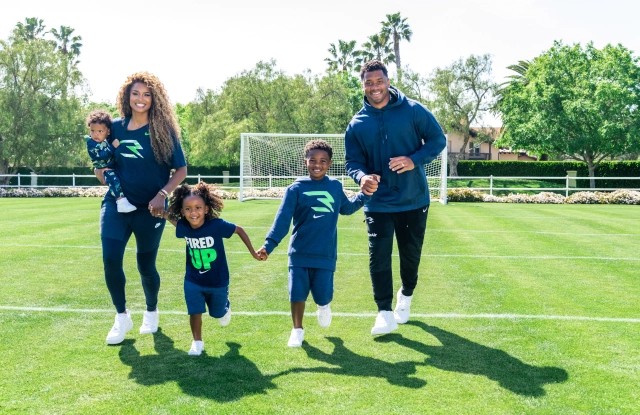 Russell Wilson is one of the NFL’s most celebrated athletes. In that vein, it is no wonder that the Denver Broncos quarterback trains hard himself and believes in “coaching his kids harder”. Recently, Wilson opened up on an episode of the podcast Youth Inc. with Greg Olsen, about his training philosophy when it comes to his kids.

Olsen asked Wilson, “How do you turn off your approach to your personal career, and then your approach to working with your children? How do you not bring your super high-intense, super perfectionist type mentality and try to implement that on such a young kid?”

The father of three without hesitation responded, saying, “I don’t struggle with it because I just do it. It should be right every time.”

He continued, “Future for example, he’s very talented. One of my pet peeves, with coaching kids these days, is like saying, ‘it’s okay to tie,’ ‘it’s okay to this, it’s okay to that. Listen, I think it’s great for kids to get outside and if they don’t win, cool, great. But if a kid has a talent, like a special gift, it’s God-given, to me, it’s our requirement to coach them and to train them to be the best version of themselves.”

The NFL star goes on in the podcast to give listeners advice on just the precise right time for a “coachable moment”.

Wilson continued with his personal take on his own advice.

“I cannot stand if my kids get a coaching lesson and they’re doing something wrong and it’s like, ‘Okay, next thing.’ No, we’re gonna fix it right. I firmly believe we’re just letting our kids get away with stuff nowadays. I think we gotta coach them harder.”

So just what is next for Wilson’s own career on the field?

Well, if you haven’t heard, the talented QB is no longer a Seahawk. He’s officially now a Bronco, with hopes to finish his career as such. The news was announced last month, and the Broncos couldn’t be happier.

“My goal is to play 10 or 12 more years and hopefully win three, four more Super Bowls, that’s the plan,” Wilson told reporters at a March 16 press conference, per ESPN. “That’s the mindset. That’s why I came here, to finish my career here and hopefully finish on top as a champion. And do it multiple times.”

DWYANE WADE SAYS DAUGHTER KAAVIA HAS HER OWN 'SWAG'

DWYANE WADE SAYS DAUGHTER KAAVIA HAS HER OWN 'SWAG'