DWYANE WADE SAYS DAUGHTER KAAVIA HAS HER OWN ‘SWAG’

"I've Done A Lot Of Cool Things In My Life, Well I Thought I Did" 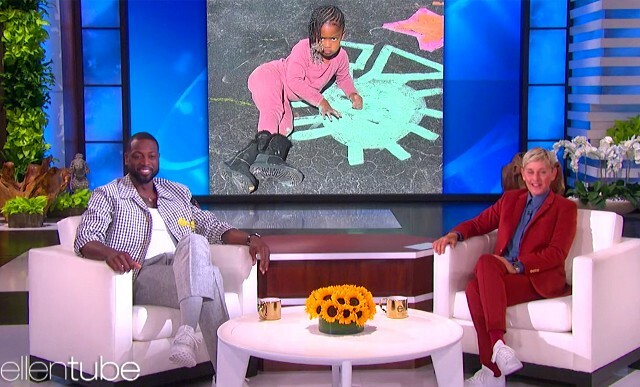 Kaavia James is the superstar of her family. Dwayne Wade recently sat down with Ellen DeGeneres where he explained how his youngest daughter is more popular than her famous dad.

“I’ve done a lot of cool things in my life, well I thought I did,” Dwyane shared with Ellen. “And forget the championships and the other things I’ve done, everywhere I go it’s like, ‘So how’s Kaavia?’ And I’m like, ‘She’s great, but let’s talk about why I’m here.'”

Kaavia James has nearly two million Instagram followers online and receives engagement thousands of her fans every day. The youngster also has a children’s book written by her parents that was inspired by her personality.

“It’s this thing about Kaavia where people have started following her, the captions on her photos, it kind of says everything we wanna say, we just can’t say it,” Dwyane Wade told Ellen. “But she has her own swag and personality,” the celebrity father added. “Through the pandemic she kept all of us going and having something to look forward to.”

Kaavia James gives her social media followers something to look forward to as well. Many fans cannot get enough of the little one’s facial expressions and absolutely live for Kaav’s reels online. A recent video post on Instagram showed the youngster spreading good cheer in honor of Monday. Kaavia’s twirling was contagious.

“We’re going to keep twirling,” The Proudly Company, which was recently launched by Gabrielle Union and Dwyane Wade, wrote in response to the social media post. “Kaavia’s beads give me so much joy,” another fan said in reference to Kaav’s hairstyle that consisted of braids with beads at the end.

Kaavia James is the youngest of Dwyane Wade’s children. The retired Miami Heat star has four kids – Kaavia, Zaya, Zaire, and Xavier – in all.

RICK ROSS OPENS UP ABOUT BUYING DAUGHTER A $300K LAMBO

RICK ROSS OPENS UP ABOUT BUYING DAUGHTER A $300K LAMBO