"Part Of The Team" 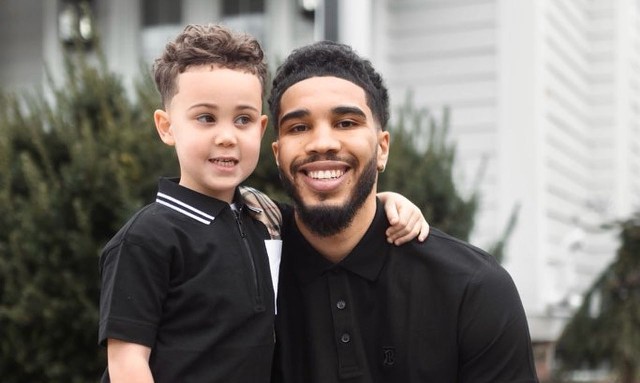 Jayson Tatum’s son, Deuce, is his biggest supporter. Deuce was recently filmed while skipping through the locker room of the Boston ‘Celtics,’ which garnered loads of adoration from fans.

In the video clip, Deuce gives high-fives to everyone like his father. The youngster does a great job of lifting the energy in the room as many players laugh while participating in the mini pep rally session.

“No one’s trying to see JT,” one Celtics fan mused. “They’re all hyped for Deuce,” the social media follower declared. Another Celtics supporter said, “He’s part of the team.”

Deuce loves to support his father at basketball games. The youngster often cheers from the stands but also celebrates with his dad from behind-the-scenes.

“It’s cool and he enjoys it,” Jayson Tatum recently said of his son’s excitement about seeing his dad play for the NBA. “Every time he comes to a home game, people cheer when they see him,” Tatum shared. “They scream his name when he comes to games on the road and here at All-Star [Weekend]. He has his own personality.”

Jaysun went on to tell the media, “I think it’s cool that he’s going to be able to see me as my career goes and, as he’s getting older now, remember certain things and interact and things like that. It’s definitely a plus.”

In terms of legacy, Tatum would like his son to remember him as a fierce competitor. “Every time he comes to the game, he sees how I give it my all,” Jaysun shared with his supporters and the press. “I’m doing everything I can in my power to help us win. Because as he gets older, team, sports, that’s what’s most important is winning and everything else besides that will follow.”

Deuce is Jaysun Tatum’s son with his high school sweetheart, Toriah Lachell. He celebrates his fifth birthday in December.