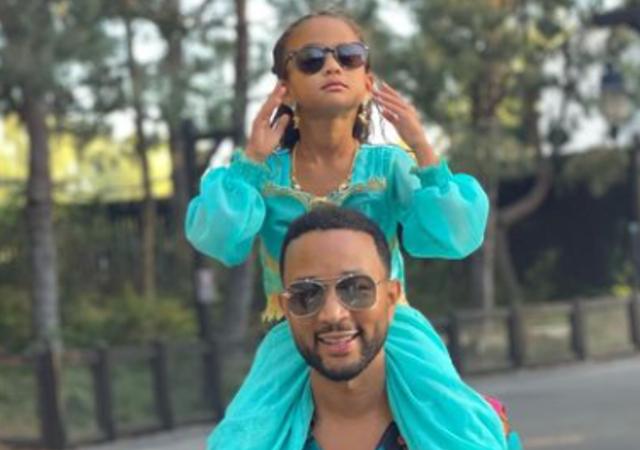 John Legend and Chrissy Teigen celebrated their daughter Luna Stephens on her birthday, which was on Thursday (Apr. 14). The celebrity parents took a trip to Disneyland in honor of their daughter’s special day.

“I can’t believe she’s 6 already,” John Legend said of his daughter. “I’m very biased but she’s soooo wonderful and I’m proud to be her dad,” the singer shared. “Happy birthday Luna Simone!” Chrissy Teigen also took to Instagram with a candid she and Luna took during the family’s spring break vacation. “Just the best little girl,” the cookbook author said.

“She’s truly the best and the sweetest,” one social media follower said. “Luna, never ever change.” Another Instagram fan commented on Chrissy’s radiance in the post as well as Luna’s vibrance. “I don’t know what you’ve been doing lately but you’ve been looking like the best you’ve ever have,” the social media follower said. “You’re absolutely glowing.”

Chrissy Teigen and John Legend are looking to expand their family with another child nearly two years after losing their youngest son, Jack, to miscarriage. Chrissy recently revealed she is undergoing IVF treatments again.

“Everything is good. I finished my IVF part, so I feel so much healthier and so much better with that,” Chrissy told Matt Cohen of Entertainment Tonight (ET). The celebrity mom also took to her social media page to announce the decision to expand the family.

“I wanted to let you guys know I’m balls deep in another IVF cycle to save as many eggos (sic) as I possibly can and hopefully make some strong, healthy embryos,” Chrissy revealed with her Instagram fans. “I honestly don’t mind the shots,” Teigen shared. “They make me feel like a doctor/chemist,” se added. “But the bloating is a b*tch,” the cookbook author admitted.

“So I humbly beg you to stop asking if I’m pregnant because while I know it’s said with excited, good intentions, it just kind of sucks to hear because I am the opposite of pregnant!”