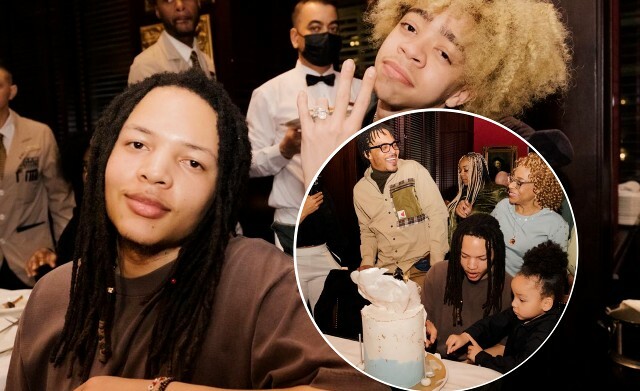 Following his birthday celebration a few days ago, Domani Harris has dropped his music video for ‘Family Connect.’ The song features his dad T.I. and his older brother, Messiah.

‘Family Connect’ is two years in the making as Domani partnered with his father and brother to create the song in 2020. The young artist waited for the right time to release the track to the public. What better time to give an additional spotlight to family than after your birthday party at which your younger sister sang The Birthday Song?

Some may have seen the now-viral clip of Domani’s younger sister, Heiress, singing The Birthday Song to her brother at his party earlier this week. Heiress’ tribute was heartfelt and too cute for words.

“That’s so sweet,” one BCK fan said after watching the clip of Heiress singing to her brother. “She got it from her mom,” the supporter added in reference to Heiress’ amazing vocal abilities at a young age. Many fans agreed that T.I. and Tiny’s youngest child does indeed have talent. “Lil mama can blow,” one social media follower said. “A Lil Tiny in the making.”

Music certainly seems to run in the Harris family. Domani started his career as a rapper when he was a child. Some doubted T.I.’s son during the beginning stages of the young talent’s artistry. Domani, however, has proven that he is more than just T.I.’s son. The artist has established himself as an independent force with which others must reckon.

“Family means everything to me and [is] the core of my values,” Domani recently said of his new single. “I just got chills,” one fan said after listening to a snippet of ‘Family Connect’ on Domani’s Instagram feed. “We’ve been patiently waiting,” the supporter continued. “Rumble, young man. Rumble.”