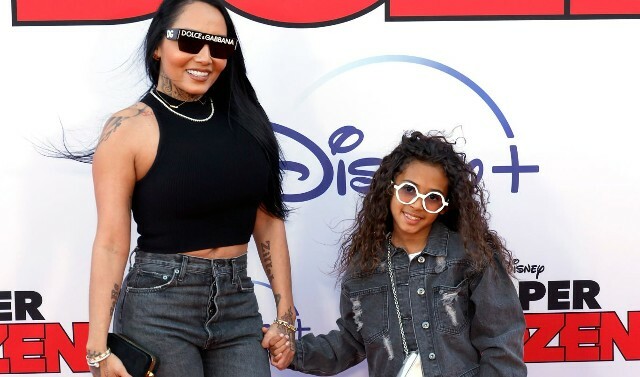 Chris Brown’s daughter, Royalty Brown, hit the red carpet in style alongside her mom, Nia Guzman, at the Cheaper By The Dozen world premiere earlier this week. The youngster had her fashion sense defined from head to toe.

Royalty went with a casual look for the premiere. The youngster wore a denim outfit that she accessorized with white-framed glasses. Chris Brown’s daughter was the epitome of cool on the red carpet as she gave photographers cute poses and the peace sign.

Cheaper By The Dozen shines a positive light on the blended family. Paul Baker (Zach Braff) and Zoe Baker (Gabrielle Union) are going with the shifts that come along with a house full of kids who each have unique personalities. Gabrielle Union, who also served as executive producer, is no stranger to blended families.

“I love it,” the celebrity recently said of her life as a wife and parent. “Every day is a challenge,” Union continued. “Just like on our movie set every day you don’t know what it’s going to be. Every day is its own adventure.”

Zoe and Paul are definitely the adults in the film. There are times, however, when the characters find themselves at odds with life’s challenges. “That’s the beauty of the movie,” Gabrielle said of the characters’ flaws. “None of us have all the answers,” the actress added. “Sometimes we need to humble ourselves and say, ‘I don’t know but how can we fix it together.'”

One thing that Gabrielle Union hopes her new film will “fix” is the way blended families are viewed by society. “We never get to see families like this celebrated,” Union told BCK during the Cheaper By The Dozen world premiere. “Usually, blended families are held up as some sort of failure,” the actress continued.

“[They are viewed] as the breakdown of the nuclear family when really, we’re not casting anybody out. We’re pulling people in with this movie. All families will see themselves reflected in this movie. And it’s about d*mn time. It’s 2022.”

Catch Cheaper By The Dozen on Disney+ today!