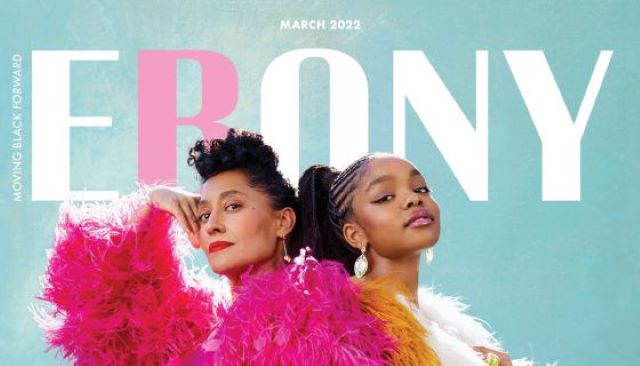 Black-ish has entertained audiences on ABC for eight seasons. Now that the show is coming to an end, many of the cast are sharing fond memories, thoughts, and their hopes for the future. In a cover-article for Ebony Magazine, onscreen mother/daughter duo Tracee Ellis Ross and Marsai Martin sit down and do the same.

Take a look at a snippet of what the pair had to say below in their exclusive interview.

Black-ish emerged during the age of Obama, and this radical shift around Black Lives Matter, Civil Rights 2.0 and getting to see the biracial experience on TV that has never been seen before. What is the series’ unique legacy?

Tracee: I feel like what we did was really transformational—both for us personally, and for the industry. Yes, in terms of what our stories were and who we were on the show, and the fact that for so long, there have been these gaps that happen in the canon of television. I think we ushered in what I hope will not be space for gaps anymore, that these stories are part of the landscape of television on a regular basis.

I also feel like it’s often really destabilizing to be confronted by the reality of this country, and to not let it squash you. It’s more than a notion to keep rising above all the limiting ideas that people have of who we’re meant to be and who we are. So to be an American, an American family, on television, the Johnsons, who don’t just happen to be Black, but are Black, and to have—on a personal level—a space where I could be free, and shine, and be a part of a family and share a version of who we are to keep expanding how the world sees us—yes, it’s really special.

The other piece is to have, across the board, so many parents from various parts of the country come up to me in restaurants, grocery stores and say, “My 12-year-old or 13-year-old will not do anything with me, will not talk to me, will not sit down at the table with me; but we watch black-ish together and I get 22 minutes to sit with my kid.” The show is based in laughter and it’s based in connection—and to me, that’s the best of entertainment.

Marsai: I started black-ish when I was 9. It was my first TV show, and it was just such a welcoming place. It’s been absolutely amazing. And it’s been so educational—having an impact on other families, as well, and building a legacy beyond what my wildest dreams would have been. We have opened the door for so many Black creators to have a seat at the table. That is a part of the legacy of black-ish, especially for my generation.

Marsai, you grew up before our eyes on the show. We’ve seen throughout TV history many child stars struggle in Hollywood. How has black-ish and having Tracee Ellis Ross as your TV mom, and your actual family been grounding for you?

Marsai: It’s just blessings all around to be a part of an amazing family that truly cares and supports me and will ride for me in any shape or form. To have so many brilliant, legendary leaders that just organically become your family like Tracee, Anthony, Laurence Fishburne and Jenifer Lewis—it’s one of the best things to ever happen to me. I’m beyond grateful. I’ve learned so many things from them. I’m not really a person that asked for advice often; I’m more of an observer. To watch people’s craft, and just see how they work and their work ethic, I absorb it and take it in. For example, with Tracee, I’ve learned to speak my mind more. I’ve learned to be my character more and be more present in the moment. I’ve definitely seen that part from Tracee, because she’s always been just so open.

My own family has sacrificed so much for me; I’ve been able to do so many things because of them. So when you talk about child actors going a different route, with my family, that’s not even a factor. It’s just the way I grew up, the way that they brought me up and the way that they ground me.

Tracee: Marsai comes from really good people. They feel like my family, too, and have from the beginning. My mom and my family have provided that kind of grounding for me as well. It’s where it comes from for me—and yes, my mom is Diana Ross; but my mother, like Marsai’s mom, Carol, is still a mom. And I’m really close with my siblings. When you have that kind of bond that is based on not what you do but who you are, I think the sky’s the limit in terms of your dreams. Also, you will always stay grounded and connected to reality and truth—and that’s what [Marsai] has. I think it’s the reason it’s been a really easy, wonderful bond between us.

Marsai, for you to be growing up on the show, and using your voice to unpack some of these topics around race, how has that experience been for you?

Marsai: For the first four seasons, I was just a kid having fun. Before black-ish, I was not on a set where I was around kids all the time, having a family unit. So black-ish was definitely the opportunity where I was just like, “OK, we get to have fun.” The playground was the house.

We love that for you, Marsai, that you got to experience joy and fun on set. Janet Jackson recently opened up in her Lifetime documentary about her experience being little Penny on the set of Good Times. There were traumatizing moments for her when she had her chest taped to make it appear smaller.

Tracee: Let me tell you something: I am a mama f**king bear. Particularly in those first few years, I was extremely protective of them as children, not as actors but as children. I advocated at many different moments and spoke up and took up arms as “Mama T” in places and in ways that I was like, “This does not feel right.” Their childhood and their souls are 10 times more important than this job and this show. Those were conversations I had with their parents, and I made myself very available to their parents. I think they all knew they could come to me if they didn’t know how to handle a situation that felt uncomfortable for them—that it was work but it was never at the expense of their souls and their hearts. I would be the liaison for those things, and I would advocate in that way. So I hope that we didn’t have any of those moments that in the long run are left as wounds. [Marsai] says the first four years felt like fun, and just knowing that is so important and means everything to me.

Marsai: Yeah, it was just fun. And I guess the more I grew up, the more I understood my craft.

Tracee: What I saw was that you started to learn how to wield your talent, how to use it, and what you wanted from it. I saw that her parents really learned how not be the stage parents that are living out their dreams through their children but are actually supporting their children in making their dreams come true, while doing it in a safe and fun way.

The bond between the two of you is so evident and real right now. We feel the love. What are your most proud moments on the show?

Tracee: The postpartum episode. I felt that we were doing something that hadn’t been done before, that was so important for the Black community, and particularly for Black women. My life’s mission is really about supporting everyone and feeling that everyone is safe and free to be themselves in the world, especially Black women. And so that episode brought a lot of pieces together for me and allowed a space where I felt proud of my work. I felt proud of what was written and what we were doing on the show, that it was told through the lens of this woman without shame, and that her husband was in support of her finding her way with it. I also loved doing the Juneteenth episode, because I felt, as a cast, we got to play together. It wasn’t just a regular episode. Another segment that I’m proud of was the one I directed that led us into the “almost-divorce” arc. Anthony and I really fought Kenya on that. We were not happy about doing those episodes—it felt really wrong. I hemmed and hawed through the whole thing. Directing that episode was really special. So in terms of the work, those are the ones that come to mind for me.

Marsai: For me, it was definitely the Juneteenth episode. It was a time where we just got to have fun. The choreography was hilarious. Being able to just be and roll up on the show, that was such a wonderful experience. And just seeing how my life was when we started versus how it is now—that’s the thing that I’m most proud of.

It is obvious that mutual admiration and bond of these two will transcend Black-ish’s fade-to-black, and endure for a lifetime.

To read the remainder of the interview, click here. We cannot wait to see what the future holds for both Tracee Ellis Ross and Marsai Martin outside of the Johnson household.

TIFFANY EVANS AND JAWAN HARRIS ARE EXPECTING THEIR FIRST CHILD TOGETHER

TIFFANY EVANS AND JAWAN HARRIS ARE EXPECTING THEIR FIRST CHILD TOGETHER