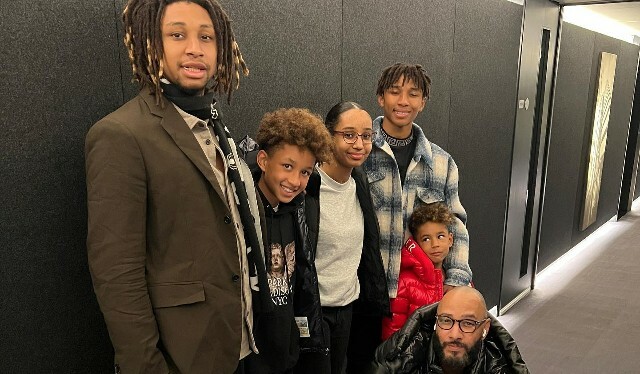 Swizz Beatz is enjoying a tour of London with all five of his kids. The producer has been sharing pictures and video footage of his “solo dad trip” on Instagram.

One video clip showed Genesis ordering sparkling water while seated for dinner at a restaurant. “We all know who’s the real Boss at the table,” Swizz mused in reference to his son’s command of the moment when ordering. “The best time is Fam time,” the producer declared.

Another candid showed Swizz Beatz with his daughter, Nicole, who primarily lives in London with her mom, Jahna Sebastian. “Father and Daughter date night,” Swizz said of his night in town with Nicole. “Some of the best conversations in the world are with your children,” the celebrity father declared. “I learn so much from my children although I drive them crazy with love,” Swizz said.

Some fans got an inside look at how Swizz Beatz and his wife, Alicia Keys, parent their kids courtesy of Alicia’s docuseries, Noted: Alicia Keys The Untold Stories, on YouTube Originals. Egypt Dean, Swizz and Alicia’s oldest son, received part of the spotlight because of his incredible ear for good music.

“I want to steal all Egypt’s melodies,” Alicia told her docuseries viewers. “I won’t lie, there’s plenty of times where after he played something that I’ll be like, ‘Hmm.’ And I’ll go back later like, ‘Let me grab those chords Egypt,'” the recording artist admitted.

“He definitely loves music so much,” Alicia went on to say of her son. “He loves the piano,” the celebrity mom explained. “He’s been playing the piano since he was four. He has an ear that is really, really special. He’ll be in the house just banging away on the piano and sometimes I’m just off doing whatever and I go back around and I’m like, ‘What? What was that you were just playing?'”

Swizz Beatz has two kids, Genesis and Egypt, with Alicia Keys. The producer fathers five children in all.