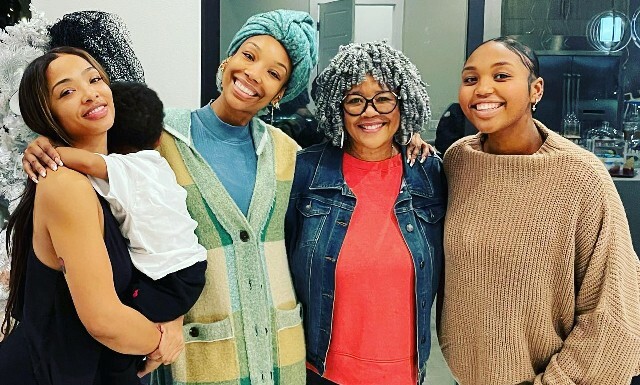 Ray J is appreciative of  the women in his life. The entrepreneur recently shared a picture of his sister, Brandy, with his mom, Sonja,  ex-wife, Princess Love, and niece Sy’rai with Instagram fans.

“Priceless,” Ray said of his family and added the hashtags #strongwomen, #family, and #myfamily. The candid also featured Ray J and Princess Love’s son son Epik Norwood. “I’m glad to see everyone is well and blessed,” one Instagram follower told Ray J. “The way they all look alike,” another fan said.

Brandy paid tribute to the late Whitney Houston when delivering the national anthem at the 2022 NFL NFC Championship game at SoFi Stadium. “What a moment,” Brandy said of her performance. “Thank you God for courage and a solid foundation,” the recording artist shared online. “I love you.”

Dozens of Brandy’s loyal supporters praised her excellent delivery of the national anthem at the NFC Championship game. “We love you so much,” Tyrese wrote in response to Brandy’s post. “Shine star SHINE,” the entertainer said. “So amazing,” Naturi Naughton said.

Brandy’s daughter continues to follow in her mom’s footsteps as a singer. It was just a few months ago that Sy’Rai sat down with Stevie Mackey for a music session. Smith sang her mom’s song, ‘Almost Doesn’t Count,’ during the segment. “It’s the effortless talent running in Brandy’s genes for me,” one social media follower said in reference to Sy’Rai hitting all the right notes. “She doesn’t even know how powerful her voice is yet and it’s NATURAL,” another fan said.

You can keep up with Sy’Rai by following her Instagram page. Ray J and Princess Love have two kids, Epik Ray and Melody Love, together.