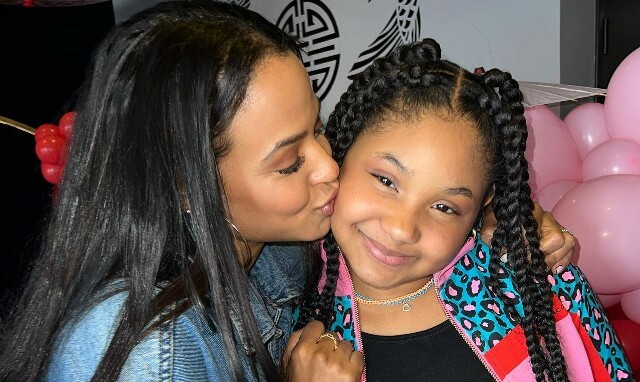 Christina Milian celebrated her daughter Violet Nash’s 12th birthday this past weekend. The entertainer took to Instagram with a beautiful message to her tween.

“Violet!! Happy Birthday my beautiful girl,” Christina wrote to her daughter. “Forever you have been my partner, my ace, my best friend. Today you are 12 – I can’t believe it,” Milian said. “This may be the last year you’ll let me kiss you in public (—you’re already acting brand new in front of your friends right now. LOL!) I hope today is a special day you’ll remember forever. You’re an awesome daughter and a great sister. We ALLLLL LOVE YOU so much. HBD Violet Madison!”

The Wife Of The Party helped Christina Milian give her daughter a beautiful bash. Violet was pleasantly surprised to see the festivities along with her friends who helped her commemorate her twelfth birthday. The Sushi House in Studio City, California, and Cookieteria By Lovely also helped make Violet’s party a success.

“I know this bday party was everything [you] wanted and everything you deserve,” Christina Milian wrote to her daughter after the festivities convened. “You are the sweetest, funniest, and most beautiful human inside and out,” the celebrity mom continued. “From the south to the west coast and everywhere around the world your family is so happy to see you grow into the lovely young lady you are. Keep being YOU!”

Violet also took to Instagram to reminisce about her birthday party. “It was so good,” the youngster told her social media fans.

Violet is Christina Milian’s daughter with The-Dream. The little one was born on February 26, 2010, which was months before her mom and dad finalized their divorce. Christina reportedly married French singer and songwriter Matt Pokora in 2020, which was months before the couple welcomed their second child, Kenna Tota. Matt and Christina’s oldest son, Isaiah, celebrated his second birthday last month.