"The Biggest Blessing I've Ever Had In My Life" 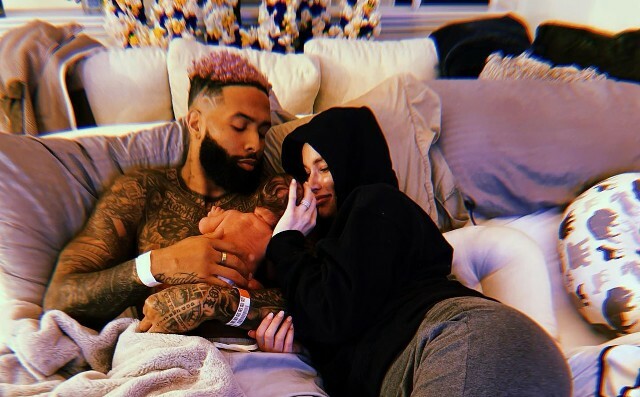 Los Angeles Rams player Odell Beckham Jr. is a father! The Super Bowl champion took to Instagram on Tuesday (Feb. 22) to announce the arrival of his and girlfriend Lauren Wood’s baby, Zydn.

“Man, man, man,” Odell began his announcement. “Where do I even begin,” the star athlete asked. “This is as real as it gets. This last week has been one that I truly could never forget. I had never been more prepared and focused for a game in my life, I was ready to go nuclear and perform at the highest level that I ever had in my career. I knew it and I felt it in my soul, I was in my biggest bag and nothing was going to stop me. I really mean that!! I was ON. Motivated, determined, and eyes set on a goal that I promised to myself and this team from the moment I decided to be an LA Ram. Safe to say those were my plans and not God’s.”

Odell Beckham Jr. was injured early in the Super Bowl game that took place on Sunday, February 13, 2022, at the SoFi Stadium in Inglewood, California. The wide receiver suffered a knee injury during the second quarter that forced him to sit out the rest of the competition. Beckham was pulling for his team from the sidelines and shed tears of joy when the Rams triumphed over the Cincinnati Bengals with a final score of 23-20. Odell and his girlfriend welcomed their baby later in the week.

“2-17-22, 0605,” Beckham told his social media fans on Tuesday. “THE biggest blessing I’ve ever had in my life arrived here on earth,” the football player exclaimed. “The words, I can’t even put together for the overwhelming emotions that ran through me … a moment I will never forget and cherish forever,” the celebrity father said.

“Zydn was born and at that moment I knew my life changed for the better,” Odell Beckham Jr. said of his little one’s birth. “Lauren Wood, you changed my life forever and delivered the most beautiful gift of all … EFFORTLESSLY,” Beckham wrote to his girlfriend. “Your strength throughout this gives me the courage to keep going because I now know with you by my side and holding it down for me, I can get through anything. I love you so much.”

Odell Beckham’s knee injury required surgery, which was a success. “I know y’all probably tired of hearing me say this every year now ‘this my year’ BUT IM GON’ BE BACK,” the Rams player exclaimed. “You better believe imma (sic) be back, and imma (sic) be back better than ever before.”