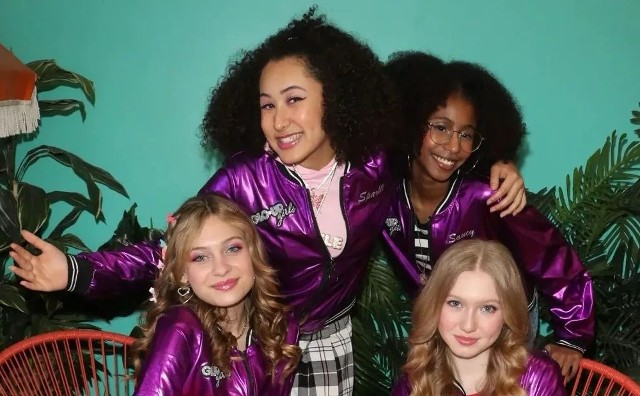 Robyn Johnson, aka Lil Bit Saucy, is truly making a meteoric assent up the ladder of success. She made history as the first ever LEGO Kid Creative Director, she has performed on tour with the likes of That Girl Lay Lay and more, and now 12-year-old Lil Bit Saucy has joined a new girl musical group, GLOTIVATION.

Building off of their wildly successful reality series GLO UP GIRLS, Far Out Records, a division of Far Out Toys Inc., formed a new girl group, GLOTIVATION. Their first single was with TikTok star McKenzi Brooke and it was a smash hit. Fans are lining up and poised for much much more from these talented rising stars.

Joining the dynamic girl group alongside Johnson are the following:

Malikah “Sparkle” Shabbazzi is a 12-year-old accomplished singer, dancer, and motivational speaker from Los Angeles, CA. Additionally, Malikah is a brand ambassador for Mixed Chicks hair products and she is a proud member of Girls Make Beats, which is, if you haven’t heard, a global movement empowering the next generation of female music producers, DJs, and audio engineers. Talent in the entertainment industry is truly a family affair as Malikah’s uncle is none other than Mr. Bobby Brown himself. Malikah’s goal for the future is to become a heavy-weight in the music industry, in addition to becoming a business owner. She wants to become instrumental in mentoring young people.

Liliana “Lulu” Tani is a 13-year-old singer, musician, and songwriter. This talented songstress is not only the newest member of GLOTIVATION, she is also a member of several singing groups in her native state of Utah. Liliana’s talent extends beyond her voice as she plays multiple instruments, aspiring to graduate from a college music program with plans to become a professional photographer and costume designer.

Abigail Zoe Lewis is a 14-year-old actress, singer, and Taekwondo black belt from Orange County, CA. She is deeply involved in non-profit work and is passionate about helping people. Looking ahead to the future, Abigail wants to cultivate the growth of her acting and singing careers with future hopes to work with a humanitarian organization focusing on food, shelter, jobs, and mental health.

According to a recent press release, music industry heavyweights Tor Hyams and Lisa St. Lou are producing the new group. Tor is a Grammy-nominated composer and record producer who launched Kidzapalooza and Austin Kiddie Limits to compose music and direct new video content. In addition, New York City-based Lisa, a professional recording artist with Broadway credits, will coach the girls vocally and help them find their “GLO.”

Robyn, you have done it again! We cannot wait to see what you surprise us with next!