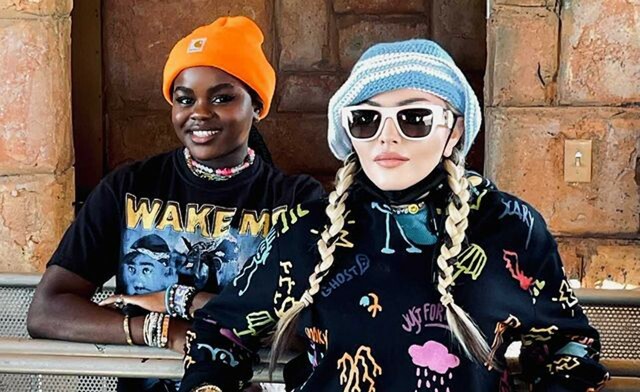 Madonna celebrated her daughter Mercy’s sixteenth birthday with a trip to a theme park and an exhibit. The celebrity mom shared footage from her trip to Magic Mountain with her daughter on Instagram.

“Magic Mountain with Mercy James for her B-day,” Madonna captioned underneath the video clip of her and Mercy’s day of fun at the park. The legendary recording artist shared an emoji indicating her feelings about roller coasters. “Yeah, I don’t do roller coasters either,” one social media fan said. Another supporter wrote, “They’re really making you ride all these roller coasters. Love it!”

Madonna also took to Mercy to the Tupac Shakur exhibit at the GRAMMY Museum in Los Angeles. The “Wake Me When I’m Free” presentation sheds light on the creative spirit Tupac was as well as the impact Tupac’s music continues to have on the industry. There are eleven galleries that make up the exhibit. Madonna and Mercy visited all of the presentations.

“Introducing Tupac and his love of books and words and poetry to Mercy James on her birthday,” Madonna said of her and Mercy’s trip to the exhibit. The celebrity mom also uploaded pictures that featured her and Mercy standing beside some of the artistry.

“We specifically built this experience for everybody,” Arron Saxe, one of the exhibit’s producers, said in a statement to the press. “We do that by telling stories about his childhood, his mother, Afeni Shakur, who was a high-ranking member of the Black Panther Party in Harlem.”

Tupac Shakur was murdered in Las Vegas, Nevada, on September 7, 1996. The rapper’s vehicle was ambushed fifteen minutes after police released him for failing to properly display his vehicle’s license plate on the back of the car. It was later discovered that a Southside Compton Crip fired the fatal shot that night after being attacked by Tupac Shakur and Suge Knight’s entourage at the MGM hotel and casino.

Learn more about the “Wake Me When I’m Free” exhibit here!

"THE PROUD FAMILY: LOUDER AND PROUDER" DROPS NEW CLIP AND IT'S HILARIOUS

"THE PROUD FAMILY: LOUDER AND PROUDER" DROPS NEW CLIP AND IT'S HILARIOUS